Momotarô is a very popular hero of the Japanese folklore, whose story was presumably first put in writing during Edo period (1603-1868).

As many tales that were passed down orally during centuries, the original story was probably modified and several versions exist today.

The most frequent rendition

Once upon a time, a woman was washing laundry in the river when she saw a giant peach floating toward her. She brought it back to her husband, and when they opened it, they discovered a child, who explained being sent from Heaven to become their son. They named him Momotarô 桃太郎 (momo meaning "peach" and Tarô being a very common name for firstborn sons in Japan).

Growing up, Momotaro became very strong, but also very lazy, and spent his days sleeping. One day, he heard that demons were living on Onigashima Island (鬼ヶ島). The villagers urged him to go fight the demons. On the way to the battle, Momotaro met and befriended three animals, a dog, a monkey and a pheasant, that could speak human language. The group of four arrived in Onigashima where they defeated the demons.

Momotaro and his friends came back to the village after the capture of the demons’ boss, with its treasures and a large quantity of food. They then lived together happily and rich ever after.

Variation of the tale

The second part of the story is often told the same way, but according to another version of the legend, the childless woman was old. She took a bite of the giant peach, which gave her back immediately her youth and beauty. Her husband was surprised when he came back home, but after hearing her explanations, he also ate the fruit, with the same consequence.

The rejuvenated couple then gave birth to Tarô 太郎, a boy who grew up to meet his parents’ expectations: he was kind, brave, strong and friendly (the perfect role model for children’s tales!).

Posterity of the legend

During the Second World War, Momotaro was largely used in movies and cartoons as a representation of the Japanese government, the animals being the people, and the demons the United States. Onigashima may have been a symbol of Pearl Harbor.

Nowadays, the legend is often linked to Okayama City, from which it probably originates. The demons’ island is said to be Megijima in Seto Inland Sea, near Takamatsu, a place renowned for its wide caves. Statues of demons were even carved there in reference to the tale.

The legend of Momotaro is a normal encounter in daily life in Japan:

The Japanese popular culture also took over the legend and Momotaro’s character is featured in many manga and video games:

It is also possible that Roald Dahl’s novel, and consequently the adapted animated movie James and the Giant Peach (Henry Selick – 1996), were freely inspired from Momotaro’s tale. 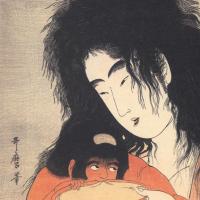