The Little Kyoto of the Japanese Alps

Takayama is a japanese city of Gifu prefecture, located in the heart of Hida mountains in the Japanese Alps, on the main island Honshu. Its full name being Hida-Takayama, this ancient feudal city is now an increasing appreciated rural and historical touristic destination. Its festival, one of the three most beautiful of all Japan, is celebrated in spring and fall.

Takayama succeeds in preserving its traditions which can be discovered in its small Japanese districts. Nicknamed the "little Kyoto" because of its parallel streets made out of Kyoto’s map, Takayama reveals a very rich historical heritage. It is easy to walk around without getting lost.

The old town welcomes travellers along the Miyagawa river, with its two to three main commercial roads where Edo-area buildings are settled. The ancient private wood residencies, including Takayama Jinya, the governmental regional office which dates back to the time when Tokugawa Shoguns were in power, alternate with craft shops, restaurants and sake 🍶 breweries.

For the early birds, morning markets (朝市 asaichi) come alive in a friendly atmosphere while presenting a beautiful local agriculture: mostly fruits, vegetables and fresh flowers. At the same level as Kobe’s, the Hida beef happens to be an exceptional culinary discover; it is possible to savor it in several forms: raw as a sashimi, cooked as a steak or grilled on a skewer.

Classified as one of the three most beautiful ones in Japan, Takayama festival takes place twice during the year: in the spring 🌸 and in the fall 🍁. In the North-East of the city, the museum of the festival’s floats is worth visiting as it is fully dedicated to the itinerant shrines and other pageantry used during the procession. As soon as we arrive at the train 🚅 station, we can find in here a museum-hall as an introduction.

Higashiyama promenade, 3.5 kilometer long, crosses Teramachi, the district of temples and shrines, and ends up on the public park Shiroyama, surrounding the ruins of Takayama castle 🏯.

In the South-West, on the other side of the train station, the folk village of Hida (Hida no Sato) establishes an authentic open-air museum where we can visit close to thirty traditional houses of gassho-zukuri style, easy to recognize with their snow-proof thatch roof.

⬇️ Further down this page, discover our visit guide in Takayama and around.
By Kanpai Updated on November 30, 2022 Takayama
Review this place Have you ever visited Takayama ? Share your opinion
Community's rating
4.92/5 (12 votes)

Our Pictures of Takayama

How to go to Takayama?

Where to stay in Takayama?

When to visit Takayama?

One to two days on site

How to say Takayama in Japanese?

Morning markets: everyday from 8 a.m. to noon (7 a.m. during summertime)

What are the festivals held in Takayama? 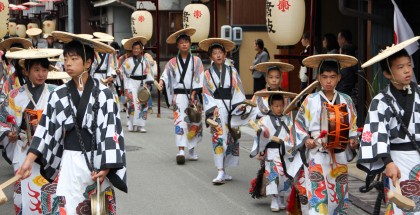 What to see near Takayama?

The Temple-Museum in Shirakawa-go
Myozen-ji is a temple of the Buddhist Jodo School or "Pure Land school", founded in 1744 and located in…
Kanpai's rating
~34km away

Traditional Thatched Roofs Villages
Shirakawago is a gathering of historical Japanese villages located in Shokawa Valley, in the northern part of…
Kanpai's rating
~37km away

The popular valley of the Hida Mountains
Kamikochi is a 15-km forested valley located along the Azusa River, in the Northern Japan Alps of Nagano…
Kanpai's rating
~42km away

Authentic Traditional Villages in Toyama
Gokayama is a group of Japanese rural villages with a preserved ancient architecture, located in Shokawa…
Kanpai's rating
~50km away

Introduction to the Sacred Alpine Mountains
Tateyama Museum is located at the foot of the Tate Mounts in the Japanese Alps, in the south-east of Toyama…
Kanpai's rating
~56km away

The Japanese Alps for Everyone
Tateyama Kurobe Alpine Route is a touristic attraction located in the north of the Japanese Alps. It connects…
Kanpai's rating
~57km away

The Highest Point on the Alpine Road
Murodo is a volcanic plateau culminating at 2,450m (8,038 ft.) above sea level, and the highest place of the…
Kanpai's rating
~59km away

The Urban Capital of the Northern Alps
Toyama is the capital of the eponymous prefecture, leaning on the Tateyama mountain range and facing the Sea…
Kanpai's rating

Takayama and the Kanpai Community