Akihabara is one of the most famous districts in Japan’s capital city. It is especially popular with geeks and has been nicknamed “the electric town”. It is one of the districts of Tokyo most visited by foreign tourists, mostly young ones, as it is largely dedicated to electronics and therefore a perfect place for otaku.

As you walk through the station exit, your eyes are met with an array of themed shops that immediately set the tone. The largest stores can be found around the station as well as those offering tax free shopping for foreign tourists (who merely need to produce their passport) staffed with polyglot salespersons. When you look at the rows of shops selling miscellaneous articles, you may even mistake your surroundings for a Hong-Kong market.

On Akihabara’s main street you will also find the Sega Club, a major four-story arcade venue. Fight games are just as popular as ever and it is even possible to challenge a player in the middle of a game by taking the cabinet opposite him/her. It is to be noted that, as often in Japan, smoking is allowed in game arcades.

Take a plunge beneath the surface

In Akihabara’s side streets, there are a lot of lower-profile stores where you can often get better deals. However, in many Akihabara stores (like, for example, Super Potato, a retro video game retailer highly popular with tourists), prices have been allowed to soar since the change of millennium and the drastic rise in the number of visitors. When we first went in 2003, you could actually find good bargains, but this is hardly true today…

Some people are of the opinion that Akihabara does not hit the mark anymore, especially due to the flow of foreign tourists which partly accounts for rising prices, but also because several iconic stores have closed down. The upper floors of buildings are often worth a visit as verticality reigns supreme in the district.

It is probably after nightfall that Akihabara is the most appealing. The atmosphere is suffused with the brightness of artificial lighting and pervaded with the sounds of thousands of noises rising from game consoles such as the endlessly repeated “irasshaimase!” (Welcome!), creating a unique environment. Be warned however: despite the district’s myriad dazzling lights and its crowd-drawing clamor, most stores close for the night on the stroke of seven when neon lights go off and megaphones go quiet until the next morning and the beginning of new hard day’s work.

The items sold in Akihabara traditionally cover a large quality range. Akiba, which is short for Akihabara, remains nonetheless a must-see place for the world’s otaku in love with popular Japanese culture.

Nakano Broadway, in Western Tokyo, is also a good alternative to Akihabara.

⬇️ Further down this page, discover our visit guide in Akihabara and around.
By Kanpai Updated on August 28, 2020 Akihabara
Review this place Have you ever visited Akihabara ? Share your opinion
Community's rating
4.44/5 (9 votes)

Our Pictures of Akihabara

How to go to Akihabara?

Where to stay in Akihabara?

When to visit Akihabara?

Depending on your degree of otaku, count one hour to a full day!

How to say Akihabara in Japanese?

Shops generally open from 10am to 8pm

What to visit in Akihabara?

The retrogaming temple in Akihabara
Super Potato is a reference retro-gaming retailer, located in Akihabara, the electronic district bordered by…
Kanpai's rating

The Great Akihabara Shrine
Kanda Myojin is a glowing ancient Shinto shrine, located in the north-east of Chiyoda ward in Tokyo. Sit atop…
Kanpai's rating

The otaku experience
During our previous trips to Japan, we had never had the opportunity of attempting the Maid café experience…
Kanpai's rating

What are the festivals held in Akihabara? 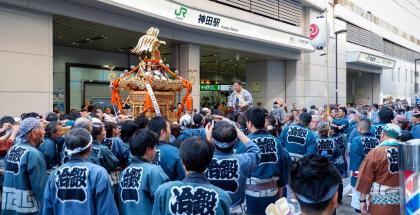 The Great Tokyo Festival Established by Tokugawa Ieyasu
Kanda Matsuri is a Shinto festival taking place in mid-May on odd-numbered years in the center of Tokyo. It…
Kanpai's rating

What to see near Akihabara?

The Plum Trees Shrine in Ueno
Yushima Tenmangu is a Shinto shrine located near Ueno Park and Tokyo University, in Bunkyo ward. Each year…
Kanpai's rating
~1.33km away

Ueno's popular market
Ameyoko is a commercial and popular street that links the south exit of Ueno Station to Okachimachi Station…
Kanpai's rating
~1.45km away

The otaku goods store in Ueno
A short walk from JR Ueno Station in Tokyo (on the Yamanote subway line), is a store well known to all fans…
Kanpai's rating
~1.62km away

Historical Boat Ride on Tokyo’s Rivers
Nihombashi Cruise is a boat ride on the Sumida River, starting from its pier at Nihonbashi bridge located in…
Kanpai's rating
~1.75km away

Tokyo’s working-class neighborhood
Ueno is one of Tokyo’s largest quarters, located to the north-east of the city center, in the Taito district…
Kanpai's rating
~1.82km away

Tokyo's heart
Chiyoda is the central district of Tokyo, in the heart of the Japanese capital. Almost fully surrounded by…
Kanpai's rating
~1.84km away

The Sumo wrestlers’ district
Ryogoku, located east of the Sumida River, is the name of the district where sumo wrestlers live in Tokyo. It…
Kanpai's rating
~1.89km away

Heart of the district
Ueno Park is a large public garden located in Taito Ward, North-East of Tokyo. Including a pond, a zoo and…
Kanpai's rating
~1.89km away

Japanese traditional wrestlers’ early morning routine
One of the prospective Sumos’ daily duty is keiko or practice. It is held every morning at the stable or beya…
Kanpai's rating

Akihabara and the Kanpai Community