The City of Momotaro

Okayama is a seaside town, capital of the eponymous prefecture in Chugoku area. It is halfway through Osaka and Hiroshima, separated from Shikoku Island by Seto Inland Sea. A former feudal city, it is renowned for having one of the three most beautiful gardens of Japan, the Koraku-en, and its black castle U-jo.

The city itself may not be Japan's tourist mecca, but one can easily spend one day here, for three very interesting visits:

The castle 🏯 and the garden are on each side of the Asahi River, in the same area, which is a great advantage for sightseeing.

They are located about a twenty minutes’ walk from Okayama Station, through the usual shopping arcades, with many occasions to do some window-shopping or taste the local food. But it's also possible to get on the small Okayama Electric Tramway (Okaden) which takes to the banks of Asahi River in a couple of minutes. It is to be considered especially on very hot days.

The legend of Momotaro in the heart of Kibi Plain

Going outside Okayama City, the rural landscape of the Kibi Plain unfolds. We recommend renting a bicycle there to tour the 17-kilometers road spanning between Bizen-Ichinomiya and Soja JR stations.

This sightseeing itinerary includes several shrines related to the former Kibi kingdom and the legend of Prince Kibitsuhiko-no-Mikoto. The story of his defeating Ura the demonic ogre is said to have inspired the legend of Momotaro, the famous boy born from a peach that every Japanese know!

Kibitsu-jinja, the most important shrine of the area, recalls this fantastic story and displays a preserved architecture of kibitsu-zukuri style, as well as one of the longest wooden corridor in Japan.

If you have the occasion, go to Okayama for a relaxing one-day getaway. The place is easily accessible from the surrounding largest cities (Osaka, Kyoto and Hiroshima), and is a nice introduction to beautiful local destinations such as Kurashiki and Seto Inland Sea’s artistic islands.

⬇️ Further down this page, discover our visit guide in Okayama and around.
By Kanpai Updated on December 30, 2022 Okayama
Review this place Have you ever visited Okayama ? Share your opinion
Community's rating
4.86/5 (7 votes)

Our Pictures of Okayama

How to go to Okayama?

Rates for one-way trips, or included in the JR Pass

Where to stay in Okayama?

When to visit Okayama?

Allow a long half day or a short day

How to say Okayama in Japanese?

What to visit in Okayama? 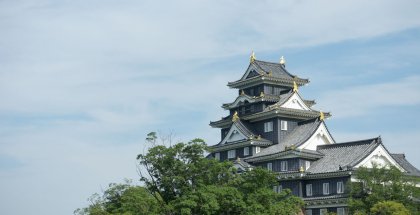 The Black Castle with Shiny Gilding
Okayama Castle is a Japanese fortified monument located in the eponymous city and prefecture. Completed in…
Kanpai's rating

Momotaro’s Shrine
Kibitsu-jinja is a great Shinto shrine located in the north-west of Okayama. Loved by the locals, it displays…
Kanpai's rating 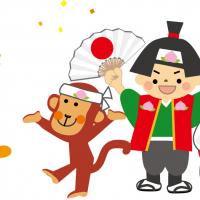 What to see near Okayama?

The small Kyoto with waterways
Kurashiki is a Japanese city with 476,000 inhabitants, located in Okayama prefecture, on Honshu Island. Its…
Kanpai's rating
~19km away

The Small Artistic Island Off Okayama
Inujima is a small Japanese island located in Okayama prefecture, in the Seto Inland Sea. Its landscapes…
Kanpai's rating
~22km away

The Highest Castle in Japan
Bitchu-Matsuyama Castle is a fortified monument located in Takahashi city’s downtown, in Okyama prefecture…
Kanpai's rating
~36km away

The mountain observatory in Takamatsu
Tourist attractions in Takamatsu are actually visited quite quickly. Yashima, located not far from the city,…
Kanpai's rating
~38km away

The Sublime Japanese Park in Takamatsu
Ritsurin Koen is a vast 185-acre Japanese garden dating back to the 17th century, located in Takamatsu, on…
Kanpai's rating
~57km away

Ponyo’s lovely fishermen’s village
Tomonoura is a port town on the shores of Seto Inland Sea, in Bingo, a region located in the south-east of…
Kanpai's rating
~68km away

The Merchant Town in Mima
Udatsu no Machinami is a former merchant’s district located in Mima, in Tokushima prefecture on Shikoku…
Kanpai's rating

Okayama and the Kanpai Community