Asian architecture can easily be recognized for its curved roofs, gigantic gates, and sacred ropes (shimenawa), all of which are often applied to shrines. Each country’s shrines possesses their own characteristics; in Japan, Shinto architecture began to develop after Buddhism had already settled in the nation. Before this, Japan did not have permanent places of worship. Japanese people instead built shrines for specific events or to celebrate a religious event on a fixed date. These shrines have an ancient aspect, as their architecture has remained almost the same since the first permanent temples. Visitors often think of Japan as a country where the ancient and the modern form contrasts in a more visible manner than they do in other countries.

A jinja is a shrine that is home to a kami, or Japanese god-spirit. At the beginning, when most structures were only temporary, they were created to appeal to the gods and to bring luck to villages. When Buddhism arrived, the Japanese people discovered the concept of permanent temples. The places of worship then began to be rebuilt identically, both to show ties to the country’s architecture and to introduce the new concept of rebirth and reincarnation.

A Shinto shrine is actually a collection of several buildings that together provide both religious and aesthetic value. These shrines look like monasteries, as they are made of several buildings and include statues, gardens, and places of celebration. All shrines have similar elements, but these aspects are not actually mandatory.

The main goal of a shrine is to allow people to worship a deity; almost every shrine possesses a locked building called a honden, where the kami lives, as represented by an object called a shintai, which can be a statue, a sacred stone, or a mirror. This place is strictly reserved for the deity and is protected by a fence called a tamagaki. It cannot be viewed by any member of the public. The honden also serves as influence for the architectural standards of the whole site. There are approximately fifteen diverse styles, the most frequent of which are called nagare-zukuri and kasuga-zukuri, and the oldest of which are called taisha-zukuri and shinmei-zukuri.

A gate called a torii marks the entrance of the shrine. It is several meters high and easily recognizable, and it is often made of wood and painted red and black. At the bottom of this door sit two statues of guardian dogs or lions called komainu. In addition, stone lanterns called sando sit along the main path. 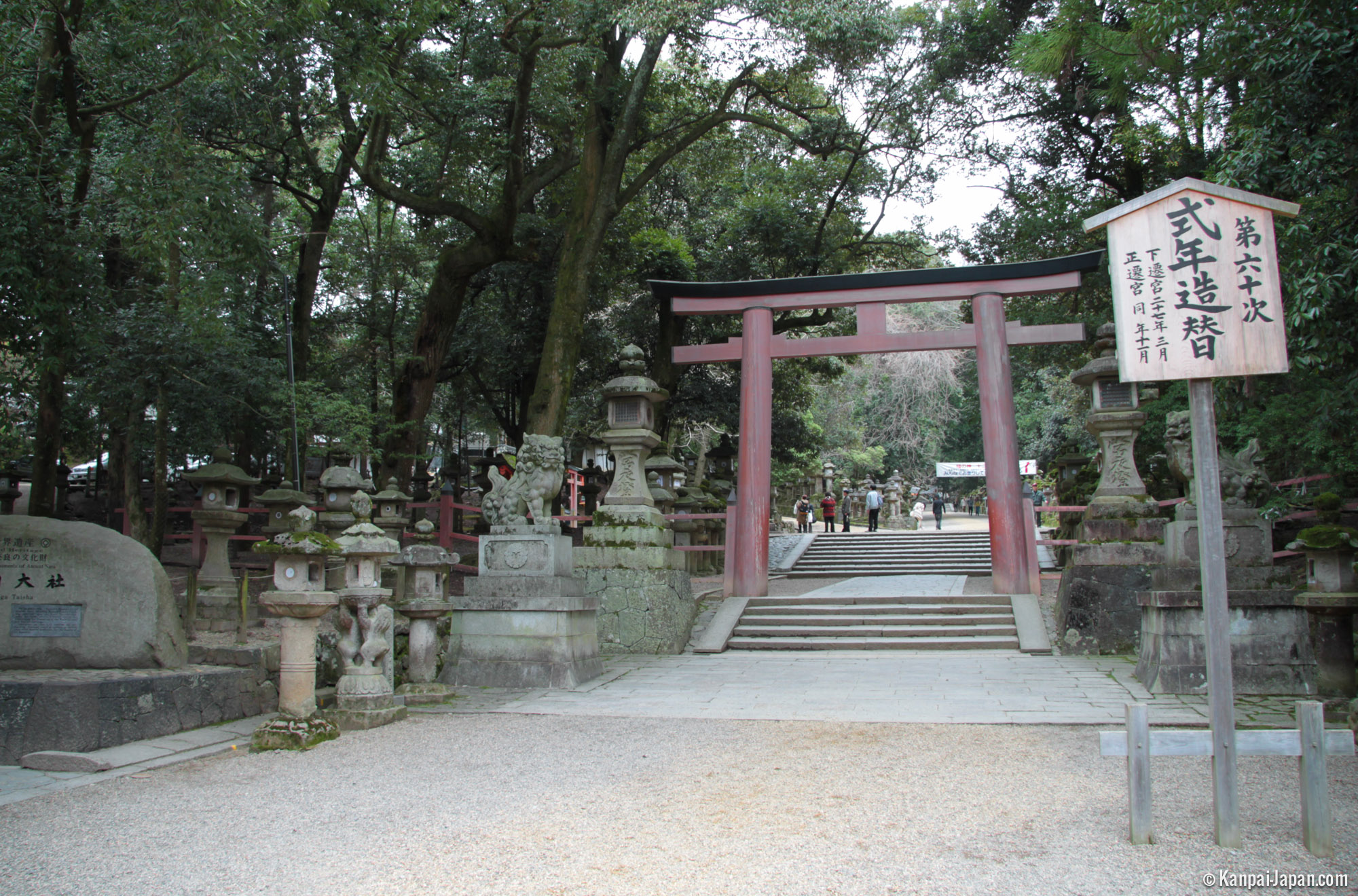 As soon as the visitor crosses the threshold of the shrine, he or she performs a purification ritual that involves washing the hands and mouth at a stone fountain, which is sheltered under a pavilion called a temizuya. As a general rule, two buildings precede the sacred room for the kami:

In front of the haiden, worshipers pray in the typical manner, which involves bowing twice, clapping twice, and bowing a final time. The worshipers then put alms in a wooden chest (saisen) and ring a bell to complete the prayer. 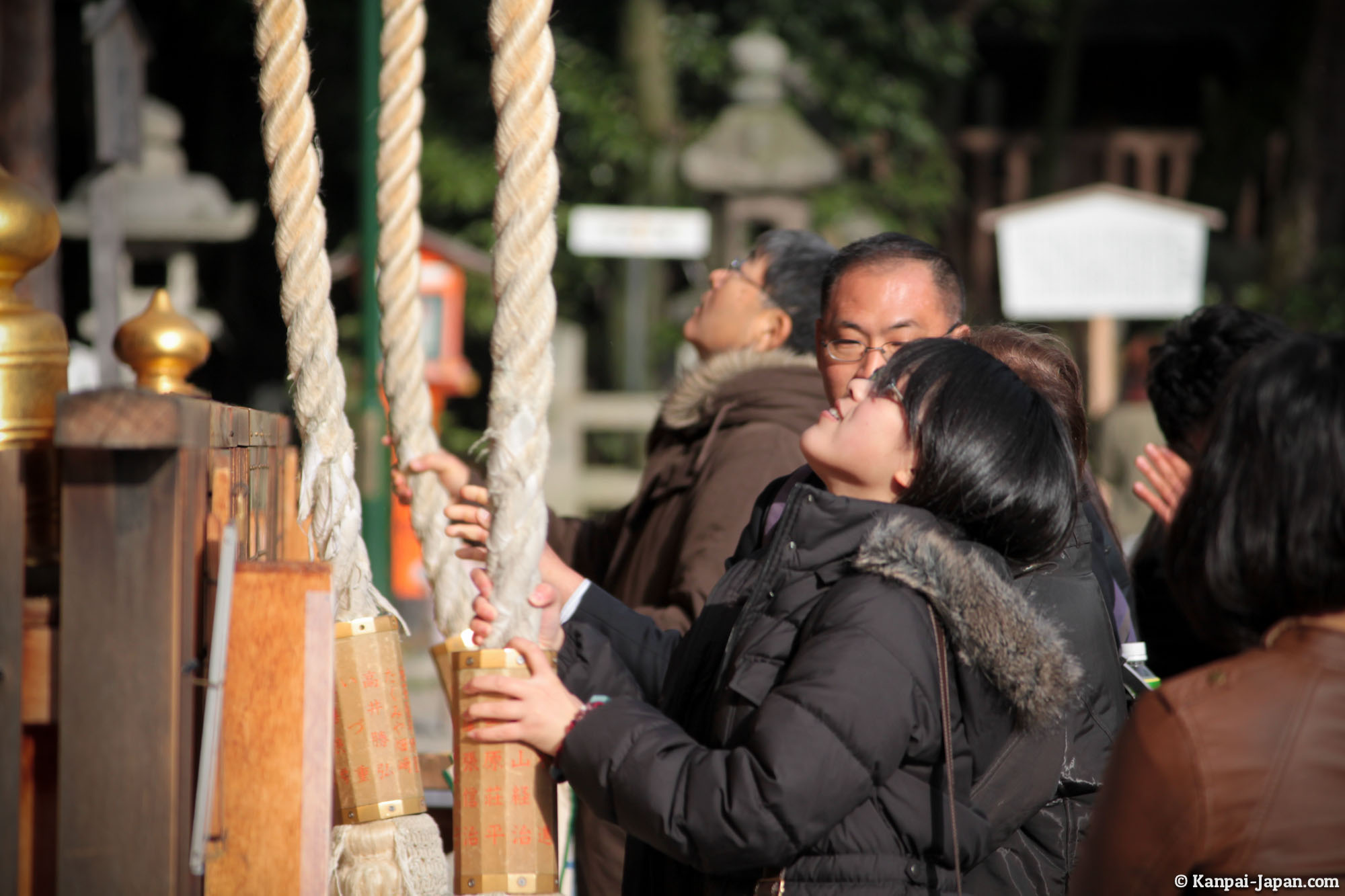 There are stands nearby where people can purchase amulets or fortunes with forecasts for the coming year. Visitors can also hang an ema, a wooden wishing plaque on which they can write a wish. For example, students often write their wishes for a successful school year.

The annex buildings include an administrative office (shamuso) and a tiny replica of the pavilions called a sessha.

A place of life and celebration

Followers of the Shinto religion celebrate life, not death. Therefore, Matsuri and other popular celebrations occur inside or nearby Shinto shrines.

For instance, when Japanese people celebrate New Year's Eve in a shrine, they purchase pieces of paper with predictions for ¥100 (~US$ 0.90) each and, if the prediction happens to be negative, they pray for a better year. They also launch fireworks so that the new year will begins under better auspices.

More than a place of worship, a Shinto shrine is a place where family members, friends, or couples can gather. It is a part of Japanese people’s lives just like any other institution. The ancient architecture allows the people to keep performing centuries-old rituals. For these reasons, many simple shrines can be found along the roads, and some houses are built in their image (with the main material being wood).

Book your hotel on Booking or Expedia

Setsubun, also called "bean-throwing festival," is an annual tradition held each February 3 in Japan. It...

Shintoism is often cited as a religion, and yet, before Japan welcomed Buddhism, locals did not talk about...
Ouvrir le menu Menu