Kimono 👘 and yukata are wafuku (和服), Japanese traditional clothing. Nowadays, the kimono is favored for special and formal occasions, while the yukata is preferably worn in summer for leisurely moments. With these differences in mind, there are still a few rules to know to don these traditional robes with elegance. Let us have a look on the most important ones.

The basics to wearing a kimono

A kimono is a T-shaped dress that can be worn either by men or women, and both genres wear a juban (襦袢, a white or clear colored robe used as underwear) underneath and tabi (足袋, toe-divided white socks). The left side of the robe must overlap the right side. Make sure to respect this rule as the overlapping right side is the way to dress the deceased!

Women’s kimono is the more sophisticated, with a large array of colors and patterns selected for the occasion, the woman’s age or if she is going to practice a traditional activity. The obi (帯) belt is tied in the back, with different types of knots chosen for the occasion, the age or left to the woman’s imagination. The kimono for men is usually of dark hues: indigo, grey or black, also chosen according to the occasion. When decorative patterns appear, they are generally geometrical forms.

Wearing kimono varies with subtle details according to the sex:

Moreover, women’s kimono sleeves tend to be longer and dangling. The man’s attire is also usually complemented by the haori, a large vest descending to mid-tight, open on the front and whose swathes are fastened at chest level by a cord usually plaited and ornamented with pearls or with a tassel for the most formal ones.

Men and women alike wear zori (草履), thonged footwear with a wedge sole. They are thicker for women and the heels higher than the tip. They are usually worn one to two sizes shorter than normal shoes, making the feet overhang at the back, which gives women an unsteady gait.

Several hidden accessories are also necessary to wear a kimono:

And that’s not all! The kimono must hide the curves of the body. Before putting on the robe, women must therefore place paddings on their lower back, above the chest and around the waist, depending on their morphology, to obtain the final tube-shaped silhouette. Men also have to comply with this esthetic requirement, with padding on the abdomen. Other accessories, such as obi ita (帯板, "belt plank") help ensure the hardness of the decorative belt, and cushions are also placed in the obi’s knot to give it more volume.

Lastly, excessive makeup or gaudy jewelry are to be banned.

Yukata on the creative side

Yukata wearing globally follows the same rules and differences as the kimono. However, since this garment is intended for informal or leisurely moments, the choices in colors, patterns and even length of the robe are wider. It is especially true for men’s yukata: the more classical have natural or clear colors and / or indigo-dyed patterns, but men also often chose flower motifs, contemporary patterns, or vivid colors for their yukata.

The yukata is commonly donned without juban underneath. However, it is still important to hide the body’s curves: women use paddings made with towels that also conveniently absorb sweat.

Footwear can also be zori, but less sophisticated than the ones worn with kimono. Men can wear geta (下駄), the casual wooden clogs. Sandals and western-style summer shoes are being increasingly worn as well.

However, the yukata tends to lose its simplicity to a sophistication that used to belong to the kimono’s realm. Japanese fashion addicts have also found a wonderful space for creativity in the yukata.

Any clothing, whatever their origins, are not complete without the highlights brought by a hairstyle and accessories. We already skimmed on the footwear, but other general rules for wearing kimono or yukata exist.

The hair must be done to suit the formality level of the kimono, especially for women. The more solemn the occasion is, the simpler the hairstyle should be, without ornaments, and usually the hair combed back in a bun. However, when wearing a kimono for a happy occasion, a fancier hairdo is possible, with various types of styles and floral ornaments, ribbons, suitable to the length of the hair, the age, the occasion, the season, or the fashion. Men keep their hair short without specific obligation, except for the circumstances, and when long the hair is tied in a ponytail.

Young men like to sport a hat with their yukata, either a boater hat or a trilby. The straw boater and flat cap are also appreciated by men; young women take the straw hat. Everybody can wear a hat with the homongi (訪問着 "cloth for visiting") type kimono, more casual but still elegant. The style is then retro, reminding of Taisho era (1912-1926) fashion, with, for example, a panama hat for men and a beret or a cloche hat for women.

As a rule, for formal occasions, neither men nor women cover their head, except for some participants who have a specific status (for example: a bride).

Nonexpert might find very difficult to combine accessories to Japanese-style clothing, so here are some key points:

Carrying around personal belongings is also a necessity, and many solutions exist:

Regardless its type, the bag is always carried at hand or at the end of the arm for the traditional ones. Women generally do not use shoulder straps. However, the use of satchel for men is developing, and they can be sported as shoulder bags either in kimono or in yukata, depending on the occasions.

What about the knapsack? Despite its convenience, it is better suited to casual kimono, such as homongi, or to the yukata. The issue is real for fashion addicts in Japan, and there is even a Twitter thread about it: #着物にリュック (kimono ni ryukku, "kimono and rucksack") created for discussion and displaying examples.

Lastly, those who like to travel light can just slip their smartphone 📱 behind their obi and keep their hands free.

Fabrics used to make kimono and yukata can also be hijacked from their primary use and recycled to create delicate Japanese accessories, such as at Monoya Tokyo, for a traditional touch in everyday outfits. 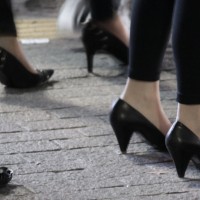 The Japanese Woman and her Stilettos

Japanese women love fashion, that's not a secret or a surprise for anybody. A lot of men, especially outside…