It is a cliché as worn out as the phrase “between tradition and modernity” that the Japanese are the most courteous, even the most obsequious of all peoples. We already tried to take an opposite view and show that the politeness of Japanese people is partly based on social customs 🛂, and intended to improve the mechanisms of social well-being. It is those mechanisms that wa intend to examine now through the study of Japanese civilization in its societal aspects. Some people consider the Japanese people in its current state of civilization as descending from century-old traditions or even the code of the Samurais. In this article, we will try to understand its sources of inspiration as well and the patterns that underlie its current mechanisms.

It is mainly in Tokyo that the civilized Japanese person is to be found. The capital of Japan, it is also its central hub and the home of 25% of the country’s population, including the suburbs. No less than 33 million people cross paths in Tokyo, walk its streets, ride its trains, visit its buildings and shops. If the people there did not follow the basic rules of Japanese civilization, the city would quickly become impossible to live in. This is why the Japanese abide by a set of rules that allows for the smooth flow of perpetual movement:

The cult of rules

This set of rules is expressed by the word マナー manaa in Japanese, from the English “manner”. The expression has become so familiar in today’s Japanese vocabulary that the vibrating mode of cell phones is known as マナーモード “manaa mode”. This is not surprising since opinion polls and studies conducted by train 🚅 companies reveal that, year after year, the main source of nuisance for passengers is the use of cell phones. And, as a matter of fact, we believe that what follows does not apply anywhere else in the world, to such extent at least: the subway 🚇 in Tokyo is pervaded with a quiet atmosphere, it is always clean and free of any food and drink debris. The campaigns organized every ten years, called “manner posters” (well, well…) provide frequent reminders of every bad habit concerned.

And they are not the only ones. The Japanese like to post signs describing good practices all over the place. Take those forbidding smoking on the street outside of 喫煙所 kitsuensho (smoking area), which are dedicated: they are based on the notion that it is an act of incivility and a nuisance to other people, and never bring up the issue of health hazard. Uppermost in people’s minds is the other and, by extension, the group which takes precedence over the individual. It is difficult however to establish the origin of this causal link: does Japanese people’s obedience to order result from their compliance with sign posted requirements or do the signs in question merely confirm a behavior already solidly rooted in society?

Indeed, complying with good manners is a way of oiling the mechanisms of society and making living together in harmony possible, even though at the cost of a few individual liberties, at least in the Western sense. Which has led some people to uphold that the Japanese are blind followers, a gullible and pliable sort. Sociologist Thomas Lifson offers a more metaphorical approach to the notion of group:

Japanese people are like passengers on a cruise ship. They know that they are stuck with the same people around them for the foreseeable future, so they are polite, and behave in ways that don't make enemies, and keep everything on a friendly and gracious basis.

Americans are like ferryboat passengers. They know that at the end of a short voyage they will get off and may never see each other again. So if they push ahead of others to get off first, there are no real consequences to face. It is every man for himself.

Considering also the geographical situation of Japan, the above theory places Japanese society under the strain of its natural architecture. In Tokyo, the most extreme example in the Japanese archipelago of a town subjected to the constraints imposed by its geographical features, where habitable land is rather scarce and nature subject to frequent whims, compliance with the rules that make it possible for individuals to live in such close proximity is itself a golden rule. More than anywhere else in the world, order and good behavior are quintessential.

Unity and a certain avoidance of immigration

Non-compliance with rules typically results in punishment. In Judeo-Christian societies, children are taught to feel guilt and act according to moral standards. Anthropologists believe that Japanese society relies instead on the notion of shame, which prevents individuals from stepping over the line through fear of attracting notice and/or being judged by others. Thus Japanese children learn humility and dignity as soon as they enter kindergarten. At school, they are trained to feel responsible for their immediate environment by joining groups that take turns to clean up the classrooms. The vast majority of students follow higher education studies and there is therefore less discrepancy between the wages of employees than in many other countries. This may explain why there are less bitterness and jealousy, less rebellious or even revolutionary feelings in Japan.

In the aftermath of WWII, Japan strongly resented both its defeat and what the population felt at the time as subjection because of the American occupation. Post-war reconstruction and then industrial and economic development relied on the involvement of every citizen and required both courage and self-denial, with everyone straining towards the same goal. This group-based driving force lived on even after the speculative bubble blew up at the end of the previous century, and Japan never resorted to massive immigration.

Although they are not over sensitive about this issue nowadays, the Japanese believe that there lies the source of their strength and fear its disappearance might result in cultural losses. Japan therefore, probably more than any other country in the world, has carefully sought to avoid ethnic diversity so as not to cause its society to change. Thus, with less than 2% of foreigners on its soil, among which a majority of Asians, the Japanese individual remains part of a group to which he belongs both because all its members are physically alike and because they share the same principles of education. Most Japanese believe that immigration would result in a loss of quality more prejudicial to Japanese society than the benefits to be drawn from it, thus keeping up a form of passive, one could even say traditional, xenophobia. A foreigner, in the minds of many Japanese people, always resembles your floundering, hardly civilized American who will never achieve their level of propriety.

Considering the fact that the Japanese population is rapidly aging, will Japan be able to maintain such views over the long term?

Are the Japanese actually faultless in matters of politeness? Probably so, except maybe when it comes to vacating their seat for letting a pregnant woman sit down or stepping forward when they happen to witness an attack/assault. They are indeed more numerous than we, in the Western world, reckon them to be to close their eyes, look away, pretend not to see… because they are not directly concerned.

Some time ago, a long message entitled “Why I do not vacate my seat on the train” was posted on a small Japanese blog and triggered a lot of reaction on Twitter. Apart from priority seats (which, as per the posted instructions, one *must* vacate for pregnant women or women with young children, and for the old or injured), the writer takes the following stand:

As it is proper to turn down a request several times, this debate is far from being closed… 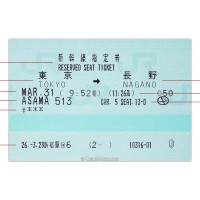 As an unavoidable means of transportation on the archipelago, the train presents some characteristics that…