Thanksgiving Day is a national holiday in Japan held every year on November 23. It is respected as a non-worked day in most work offices. And yet celebrating this event can seem a little unexpected as Thanksgiving, in Western countries, is known to be the moment to thank the Native American people for helping European pilgrims to survive their first winter in the United States of America. This day of celebration is therefore an American-only holiday and does not take place in any other country. Logically, Native American only live in the American continent and British pilgrims sailed to the USA and nowhere else.

This being said, how is that Japan does celebrate it as well?

In fact, while the name of the day is the same "Thanksgiving" in English language, the aim of it is slightly different. Japan does not have the same History and did not have any pilgrim coming to their land. In Japan, November 23 is observed, officially since 1948, as a day off in respect to what the name literally says: "thanks for giving". It is in reality an older tradition.

This "Labor Thanksgiving Day", as it is called today, was respected as early as November 678. Back then and up to Meiji Era (1868 - 1912), this day was celebrated in order to thank the current fall 🍁 season for the great harvests of rice and the farmers' hard work. It was called the Rice Harvest Festival, locally called Niiname-sai, during which the Emperor of Japan offered new crops as thanks to the Shinto deities and tasted the year’s first rice himself.

In Meiji Era, the date was set to November 23rd. Then, the modern version of Thanksgiving Day started in 1948 after the second World War. While all Shinto celebrations were abolished under American Occupation and the rules of General Douglas MacArthur, this major and ancestral tradition was still pursued behind the closed doors of Imperial Palace Shrines in Tokyo Chiyoda Ward: the Emperor continues to privately conduct the Niiname-sai annual ritual.

Ceremonies start in the evening from 6pm and the main one, which is called Niinamesai Shinkaden-no-gi ceremony, is processed from Ryoukiden Hall to Shinkaden, where the Emperor accepts the first rice and millet harvests as well as wine. He offers them to enshrined ancestors and spirits. Then, the Otsugebumi text is read, praying for the fruitful year and happiness of the Nation. Finally, during the Naorai, he consumes the year's wine and food. Also, another Morning Shinto Ritual is held on the following day.

Today, in daily life, Labour Thanksgiving Day in Japanese is named 勤労感謝の日 (Kinro Kansha no Hi) and is mostly observed to be thankful to salaries who worked well throughout the year. In Japan, it also takes place in schools where pupils make cards and gifts to municipal workers such as the policemen and firemen. Very few Japanese people are actually familiar with the American historical origins as kids think it's only an opportunity to eat turkey at home.

The day is not as festive as it is in the USA, where there are huge parades, football games, festive dinners and closed businesses. On the contrary, Japan is more silent with little celebrations and only some government services closed down.

Some labor organizations use the holiday to discuss past and future goals for recognizing workers’ rights, and sometimes families gather during this day.

Thanksgiving in Japan and in the USA happens to be quite similar by celebrating the fall’s harvests and thanking people who helping the population, however it remains different in the form it takes, as there are no big family meeting, no specific food nor decoration. Moreover, Japan has defined a specific day while the American Thanksgiving is held on the fourth Thursday of November. End of November in Japan is more about which place have reached the peak of its autumnal beauty and even where to see the first Christmas illuminations.

If you are an American expatriate or a tourist in Japan during this day, some places in big cities like Tokyo and Osaka could organize a traditional Thanksgiving dinner party. These are mostly international hotels 🏨 or American-friendly restaurants and you have to ask in advance what might be on offer.

Otherwise why not trying to get creative and cook yourself with local ingredients? After all, it's a good opportunity to invite your Japanese friends.

Happy Thanksgiving to all ^_^

Things to Do in Japan in October

October is one of the most pleasant months to discover Japan, in regards to the weather. There are no… 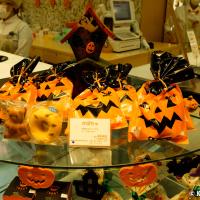 This is not the place to go back on the history and traditions associated with Halloween, but this festival…