A kaiten-zushi is a type of Japanese restaurant specialized in sushi, where dishes are put on a conveyor-belt winding in the shop. Customers just help themselves from the conveyor belt that connects their seat or table. In Japan, sushi restaurants chains have affordable prices, and the served food quality as well as the choice of fishes and vegetables are excellent.

Outside Japan, sushi 🍣 is often viewed as the basics of Japan’s everyday diet, which is incorrect. It even used to be a fancy and expensive dish in post-WWII Japan due to an embargo on raw fish sale. Refined and high-end restaurants still exist, but what helped popularize sushi was the growing number of kaiten-zushi in the 1970s. There are several thousand of this type of restaurants nowadays in the archipelago.

Their main characteristics are:

Kaiten-zushi chains have understood the needs of their customers and have long been working to cater to their wishes. For example, many restaurants now feature touchpads for orders, making them accessible in several languages, including English. Requests for a specific type of sushi can be made directly to the chef, and beverages are to be ordered from the waiters. But there is no recommendation (osusume wa?) nor omakase (let the chef decide) like in more traditional restaurants or sushi-bars.

Some sushi brands can imagine very creative ways to customize their conveyor belt. One of the most famous examples is the miniature Shinkansen 🚅 that carries directly to the diners the special sushi they ordered from the touch screen. This ordering system allows to always have the freshest sushi as they are made on the spot and don’t spent too much time on the conveyor-belt.

There are numerous sushi types and they vary according to seasons and supplies. Naturally, quality may decrease when choice increases. The most common dishes are nigiri served in pairs, but there are also a lot of maki types, as well as sashimi. Other specialties can also be proposed such as meat skewers and various kinds of deserts. Green tea and pickled ginger are always complementary.

At the end of the meal, just say gochiso-sama deshita and a waiter will come to count the plates and calculate the bill. The most advanced kaiten-zushi have an automated plates count thanks to a microchip embedded under the plates!

Among the most famous kaiten-zushi chains in Japan are: Sushiro, Ganso, Hamazushi or Numazuko.

⬇️ Further down this page, discover our visit guide in Kaiten-zushi and around.
By Kanpai Updated on February 01, 2023 Kaiten-zushi
Review this place Have you ever visited Kaiten-zushi ? Share your opinion
Community's rating
4.29/5 (7 votes)

How to go to Kaiten-zushi?

How to say Kaiten-zushi in Japanese?

Sushi is a well-known culinary feature of Japan and has long been exported throughout the world. Since the… 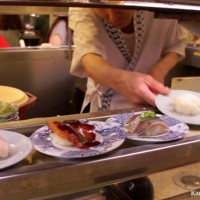 The fastest sushi chef in Japan!

Here is a short video filmed inside a 'kaiten-zushi' restaurant in Shinjuku, Tokyo during our latest trip to…

What to see near Kaiten-zushi? 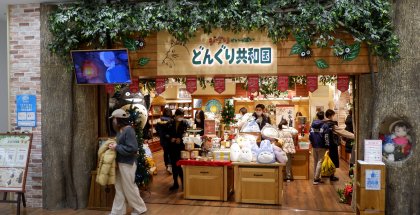 Kaiten-zushi and the Kanpai Community