The Hydrangeas Temple in Kamakura

Meigetsu-in is a Buddhist temple of the Rinzai School, located in the north of Kamakura. The temple is famous for its garden, very popular in June for the blooming of hime ajisai blue hydrangeas. At other times of the year, visitors can quietly stroll around a charming and well-designed promenade.

Meigetsu-in was founded in 1160 by Yamanouchi Tsunetoshi, before Kamakura became Japan’s capital (1185-1333), and extended in 1380 by Uesugi Norikata, the head of a then powerful clan. Locally renowned, the temple belongs to the second group of important Zen establishment in the city, after Kencho-ji and Engaku-ji. However, hidden in a green outlying valley, its discreet entrance does not even suggest the refinement of its perfectly maintained gardens.

From the start of the visit, the way Meigetsu-in’s monks care about the temple’s ground appearance is patent. Buddha statuettes in the gardens are decorated with flowered branches according to the season. Flower compositions emphasize the season’s awareness. Various landscapes are to be discovered, arranged in a beautiful harmony such as:

The buildings, however, are not of a notable interest, except for the view from the iconic circular window Satori no Mado, that reminds of a full moon.

The garden’s culmination: June and its blooming

Meigetsu-in’s beauty is magnified each year in June. Wonderful blue hydrangea flowers invade the alleyways and every corner of the garden. That’s where the temple’s nickname Ajisai-dera, literally "hydrangeas temple" comes from. However, hydrangeas’ blooming signals the loss of the place’s tranquility as a crowd of tourists (mostly Japanese) arrive early in the morning to admire the multitude of flowers.

For photographs amateurs, patience will be necessary to take pictures without any undesired model. It is however the reality of a visit at this time of the year. The magic of blooming hydrangeas is nonetheless instantly effective, even if the numerous visitors gathering to admire this ephemeral instant can disturb the quietness necessary to enjoy the scenery.

Hydrangeas aside, Meigetsu-in’s inner garden also offers iris blooming from late May to mid-June. The iris garden is then exceptionally open to the public for an additional fee. This area of the temple is thus less crowded, as well as more refined and airy, so lingering there is pleasant. The rabbit, a sacred animal and symbol of the place, is also represented by a profuse number of statues. In Japanese mythology, the rabbit is associated with the moon, to which Meigetsu-in’s name refer. The craters at its surface are said to be traces of rabbits hitting glutinous rice with a big pestle to prepare mochi rice cakes. There are also live rabbits in a nearby enclosure.

Meigetsu-in Zen temple is a nice discovery for those who are willing to visit the north of Kamakura. It is however as crowded as it is beautiful in June during hydrangeas blooming. Another ideal season to visit Meigetsu-in is in fall, when the leaves of its maple 🍁 trees turn red.

⬇️ Further down this page, discover our visit guide in Meigetsu-in and around.
By Kanpai Updated on December 23, 2021 Meigetsu-in
Review this place Have you ever visited Meigetsu-in ? Share your opinion
Community's rating
4.50/5 (4 votes)

How to go to Meigetsu-in?

Ideal in early June, but not on weekends to avoid crowds

How to say Meigetsu-in in Japanese?

Inner Garden: open every day only during iris blooming from late May to mid-June and for momiji from late November to early December

What to see near Meigetsu-in?

The Great Zen Spirit Temple in Kamakura
Engaku-ji is one of the most important Zen temples in Japan, located to the north of Kamakura, in Kanagawa…
Kanpai's rating
~550m away

The Oldest Zen Temple in Kamakura
Kencho-ji is a Buddhist temple in Kamakura, once the capital of Japan during the Japanese Middle Ages (1185…
Kanpai's rating
~650m away 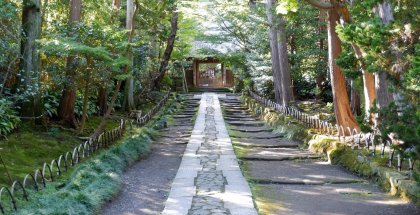 The Hills in Western Kamakura
Daibutsu Hiking Trail connects Jochi-ji temple, near Kita-Kamakura station, to the Kotoku-in, in western…
Kanpai's rating
~1.24km away

Kamakura’s main shrine
Tsurugaoka Hachimangu is the most important shinto shrine of Kamakura, a city in Japan’s Kanagawa Prefecture…
Kanpai's rating
~1.35km away

The shrine dedicated to money-making in Kamakura
Zeniarai Benten is a shinto shrine located in north-western Kamakura, in Kanagawa prefecture in Japan. This…
Kanpai's rating
~1.65km away

The Hidden Village of Kamakura
Sasuke Inari-jinja is a Shinto shrine in Kamakura, in Kanagawa prefecture in Japan. The religious complex,…
Kanpai's rating
~1.83km away

The Old Nichiren Sect Temple in Kamakura
Myohon-ji is a Buddhist temple of the Nichiren branch located in Kamakura, in Kanagawa prefecture in Japan…
Kanpai's rating
~2.36km away

The Bamboo Grove in Kamakura
Hokoku-ji is a modest Buddhist temple of the Zen Rinzai School, located on the eastern heights of Kamakura in…
Kanpai's rating

Meigetsu-in and the Kanpai Community