Daisen Park is a large 38.5 hectares public green area located in Sakai, in the southern suburb of Osaka. Stretching between the huge Kofun burial mounds of emperors Nintoku and Richu, the park also shelters 2 museums, 2 tea houses, a Japanese garden and about 1,000 cherry trees, that make it the ideal place to celebrate hanami in spring.

Inaugurated in 1947, the iconic park of Sakai City extends between the 47 ancient graves and tumuli of Mozu Kofungun group, enlisted in the UNESCO World Heritage in 2019. It borders the famous Daisen-ryo Kofun in particular, which is emperor Nintoku’s immense mausoleum shaped as a keyhole and one of the biggest tombs in the world.

Daisen Park’s 38,5 hectares are home to several buildings and facilities, including :

Many flowers and tree species also decorate the alleys and underline the passing of the seasons, such as the sakura 🌸 in spring, irises in summer and maple trees in autumn 🍁. Sakai’s inhabitants enjoy this neighborhood park all year long. As for sightseers, they get to enjoy a walk complemented by historical and cultural visits.

Of an easy access by train 🚅 from the south of Osaka, the site located in an urban suburb is consequently crossed by electric poles and wires, and nature is unfortunately absent from the surroundings. Moreover, we recommend renting a bicycle to tour the park and the area.

Japanese garden and sakura in the heart of the city

Nearly 1,000 Japanese cherry trees blossom at the end of March to early April and announce the beginning of spring and the return of warmer temperatures. At this time of the year, Daisen Park is full of the neighborhood’s families and friends who gather on tarps to celebrate hanami. On the day time, it is easy to encounter outdoor wedding photography sessions, which are good occasions to admire the beauty of traditional kimonos the couples are wearing.

Then walk to Daisen Park’s Japanese garden. Created to celebrate the hundredth anniversary of the modern Sakai city, this classical stroll garden opened to the public in 1989. Rather large, it includes a main pond with a traditional pavilion and several Japanese bridges, as well as other smaller spaces such as an aquatic garden for irises.

The Obaian and Shinan tea houses complete the walk and offer a welcome rest with a matcha tea and its confectioneries. The traditional building of the Shinan house dates back to 1929 and was designed by Japanese architect Ogi Rodo. First constructed in Tokyo’s Shiba Park, the building was moved to Sakai in 1980.

Daisen Park is also associated with the tombs of Mozu Kofungun that are all gathered in the same area. With various shapes and sizes, this burial mounds were built during the Kofun period, between the end of the 3rd century and the end of the 6th century.

The grave of emperor Nintoku, called Kofun Daisen-ryo dates back to the 5th century and is the most monumental of all : it is 820 meters long, 654 meters large and is completely covered by the vegetation. It is also surrounded by moats and its entrance, marked by a graveled plaza and a torii ⛩️ gate, is easy to be overlooked when walking on the sidewalk. From the ground, the burial mound indeed looks like a little forest, and it is not open to the visit. Its large size and keyhole shape are better comprehended seen from above.

For this purpose, you can first go to Sakai City Hall Observatory for a first look from an elevated place. Then, you can flight ✈️ in a tourist helicopter 🚁, for example, to enjoy an aerial view on the largest tumuli of Mozu, such as:

If you want to discover the cultural heritage in relation to these great tombs, you should go to Sakai City Museum in Daisen Park. Part of the exhibits is dedicated to the Kofun, with:

These tombs were never fully explored nor thoroughly maintained in order to preserve their holy character.

⬇️ Further down this page, discover our visit guide in Daisen Park and around.
By Kanpai Updated on August 30, 2022 Parc Daisen
Review this place Have you ever visited Daisen Park ? Share your opinion
Community's rating
5/5 (3 votes)

Our Pictures of Daisen Park

How to go to Daisen Park?

From the south of Osaka:

Where is Daisen Park?

When to visit Daisen Park?

All year round and for two to three hours

How to say Daisen Park in Japanese?

What to see near Daisen Park? 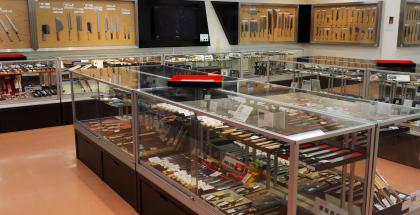 Japanese Knives in the Spotlight
Sakai City Traditional Crafts Museum is located in the south of Osaka, in the Kansai area. It focuses on…
Kanpai's rating
~6km away

The great and old shrine of Osaka
Sumiyoshi Taisha is an important Shinto shrine located in the southern part of Osaka. Its very old origins,…
Kanpai's rating
~9km away

Japan’s tallest building, in Osaka
Abeno Harukas, Japan’s highest skyscraper, is located in the south of Osaka in the Kansai region. Three…
Kanpai's rating
~10km away

The other South of Osaka, more traditional
Tennoji is a district of Osaka, accessible from the North exit of the eponymous station, located in the South…
Kanpai's rating
~10km away

Tennoji's Japanese Garden
Keitaku-en is a Japanese garden of Chinese inspiration located in Tennoji Park in the south of Osaka. A vast…
Kanpai's rating
~10km away

Osaka’s New World
Shinsekai is an iconic and popular district of Osaka, in the Kansai area of Japan. The place’s name literally…
Kanpai's rating
~10km away

Osaka’s New World Hallmark
🚧 Renovation in Progress
Tsutenkaku, literally "the tower reaching the sky" is in the heart of Shinsekai district in Osaka. Standing…
Kanpai's rating
~10km away

Osaka’s World Trade Center
Cosmo Tower is a 256 meters high observation tower, located in the south-west of the city on Osaka Bay in…
Kanpai's rating

Daisen Park and the Kanpai Community