The island’s only Buddhist temple

Enoshima Daishi is a Buddhist temple, whose official name is Saifuku-ji, located on Enoshima Island in Kanagawa prefecture, Japan. Built in 1993, it offers a stunning view from the cliffs on the southern part of the island and is an appreciated stopover on the path crossing Enoshima. The building features unique modern appearance and indoor premises.

Saifuku-ji is the only Buddhist temple on Enoshima Island, built recently (in 1993) by the esoteric Shingon school of Buddhism.

The entrance to Saifuku-ji is accessible from Oiwaya Michi path, located just at the exit of Samuel Cocking Botanical Garden. Two impressive red statues of Nio guardians welcome visitors. The Nio are deities considered as protectors of Buddha and Buddhism. Their aggressive and wrathful look comes as a contrast with Buddhism's pacifist reputation. On a closer look, the Nio on the right hand opens the mouth, which symbolizes the beginning of the universe, in other words, the apparition of life. The opposite Nio tightly closes his mouth, in a symbolization of the end of the universe, that is to say death.

Visitors should not let those ferocious guardians impress them and feel free to come in the sacred enclosure. Continuing downwards, the main building Hondo is open to visit. Numerous black and white lanterns 🏮 hide its ceiling, and dozens of small Doji statues are lined up along the dark walls, giving the room a unique, totally mystical atmosphere.

As a matter of fact, Enoshima Daishi temple’s main attraction is to be discovered beside the praying altar. Hidden in the dark room, Japan’s tallest indoor Fudo Myoo statue stands. Initially painted in red, the 6 meters high sculpture is now covered by a thin layer of sooth, that makes it even more impressive.

This change in color is due to a ritual named Goma, performed by Saifuku-ji’s priests on the last days of each month. During those ceremonies, a fire 🔥 is kindled before Fudo Myoo’s statue (the wrathful deity with a halo of flames and one of the five Wisdom Kings), to burn wooden sticks engraved with wishes. This sacred fire is also said to act as a spiritual and psychological cleansing for believers. This ritual is specific to esoteric Buddhism, and is performed in order to destroy negative energies, nefarious thoughts and desires.

The audience enters a state close to a trance amidst the rhythmical hits on taiko drums, the enrapturing melody and voices of priests chanting prayers, and the crackling of the fire. It is a perfect occasion for a memorable spiritual experience.

In addition, it is possible to receive a Goshuin (the temple’s seal and calligraphy) on one’s own shuincho notebook, as well as various lucky-charm amulets. The visit ends in a small outdoor garden with a pond. Enoshima Daishi is a pleasant and interesting discovery that will please those who would like to give their coming on the Dragon Island a spiritual touch.

This article was written after tour sponsored and organized by Fujisawa City Tourist Association. Kanpai was invited and guided but keeps a total freedom of editorial content.
⬇️ Further down this page, discover our visit guide in Enoshima Daishi and around.
By Kanpai Updated on July 22, 2021 Enoshima Daishi
Review this place Have you ever visited Enoshima Daishi ? Share your opinion
Community's rating
4.67/5 (3 votes)

Our Pictures of Enoshima Daishi

How to go to Enoshima Daishi?

From Enoshima bridge, about 15 minutes walk

Where is Enoshima Daishi?

When to visit Enoshima Daishi?

How to say Enoshima Daishi in Japanese?

What to see near Enoshima Daishi?

The Observatory at the Top of Enoshima  Island
Samuel Cocking Garden is a private green space on the top of the small Japanese island of Enoshima, in…
Kanpai's rating
~200m away

The Island’s Shinto Complex
Enoshima-jinja is a Shinto shrine located on the heights of Enoshima, as small Japanese island on Fujisawa…
Kanpai's rating
~350m away

At the Island’s Origins
Enoshima southern coast is a coastline of steep sea cliffs located at the south-westernmost part of the…
Kanpai's rating
~1.16km away

🏖 The Long Beach in Enoshima
Kugenuma beach is located in Fujisawa City, Kanagawa prefecture in Japan. On the shores of Sagami Bay, the…
Kanpai's rating
~1.70km away 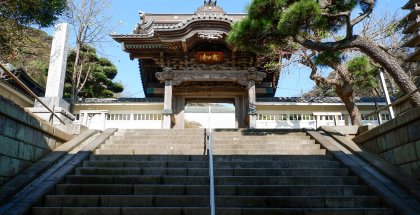 Enoshima Daishi and the Kanpai Community