10 years after the great Tohoku earthquake and tsunami, what was dreaded for months has been confirmed: Tokyo 2021 Olympic Games 🏅, postponed by one year due to the Coronavirus 🦠 crisis, will be staged from July 23 without international spectators.

This announcement provided 2 key information that should be confirmed by the IOC and the Japanese organizing committee’s joint press release in the next days:

Read more:
Why it is Impossible to Postpone or Cancel Tokyo 2021 Olympics

Why did the Japanese government make this decision? It listened to the vox populi (including over-zealous foreign expatriates), as surveys have been showing for several months that many Japanese do not want foreign visitors during the Olympics, especially since new Covid-19 variants can spark infections. According to the same surveys, the Japanese public opinion is mostly against the staging of the postponed games, but this does not seem to be of a great concern to the government… Indeed, why postponing by one year whereas cancelling could have been an (imperfect) outcome as soon as 2020 (without the new variants factor)?

Anyway, considering the TV broadcasting rights for one billion spectators probably pay much more than ticket sales (about ¥90 billion / ~699.2 million dollars, a figure to mitigate as the estimation was made before Covid), the IOC is guaranteed to earn its commission thanks to the sponsors. Overseas fans are thus sacrified in order to allow the staging of the Games, and not to promote the Olympic values nor the reconstruction of Japan post 3.11, but to roll over the debts of one of the most expensive summer games in history.

At the time of writing, the official website still states: "Tokyo 2020 looks forward to welcoming spectators from across the world to the Games." And displays links to prepare the trip, book an accommodation and tips to "enjoy your time in Tokyo". Screenshots welcome!

Who can attend the Olympic Games in 2021?

The announcement is clear: overseas visitors will not be allowed to come to Japan to attend the Olympics, even if they had bought tickets for ceremonies or competitions.

Summer weather in Japan is hot and humid, and as detrimental to the athletes’ performances as to the spread of the Coronavirus. However, the once considered preventive measures did not seem to weight in favor of overseas fans, such as:

However, Japan has decided on an EXCLUSION of foreign spectators from attending the games, although they were 1 million ticket holders for Tokyo 2021, about 15 to 20% of the total number of spectators. Is it possible to imagine June 2021’s UEFA European Football Championship (also postponed by a year for the same reasons as the Olympics) with each host country excluding foreign fans?

The only foreign visitors allowed to enter Japan during the games will be the athletes, their staff and medias (and of course, IOC members). These 70,000 gaijin, including 11,000 athletes, will be strictly monitored.

In February, the Japanese organizing committee announced that wearing face mask 😷 will be mandatory for the athletes (except when eating, sleeping or training), that they will be isolated in the Olympic village and they will have to be PCR tested at least every 4 days. In early March, even tighter measures were announced. There are still 4 months left before the beginning of the competition, so more surprises may await!

As for international fans, only expatriates already living in Japan will be able to attend the event, in accordance with the limitation of spectators’ numbers, to be announced in April. We regret that implementing such a limitation to overseas visitors was never discussed, as the government preferred to exclude them altogether. The health protocols to access the venues is unknown yet, the only thing certain is body temperature checks at the entrance with infrared forehead thermometers, but nothing was said about a possible prohibition of entry if a temperature threshold is crossed.

Regarding the official sponsors’ foreign guests, nothing has been decided yet, but their number is easier to handle.

What about reimbursements, with tickets often purchased several years in advance? How to decide on the numerus clausus allowed in the stadiums? Many questions are left unanswered, which highlights again Japan’s inability to swiftly handle an unheard-off situation. If it is not perfect, then it is impossible…

What can also be inferred, and within what was to be expected, is that Japan’s borders will not open to tourism before September 2021 at the earliest, after the end of the Paralympics.

The head-in-the-sand attitude: denial of contamination spreading and preventive measures

Explaining again the huge difficulties caused by the global health crisis since last year is useless. The conundrum of postponing the Olympic Games was real and heavily impacted by many influential bodies, with concerns about politics and money that had a huge effect on the decisions. However, several sparks of hope over the last few months had us expecting a more favorable outcome.

For example, many sport events were staged where spectators, allowed or not, were not the cause of Covid-19 contamination:

It is probably safe to assume that the contamination curves in Tokyo, already expected to spike up in the weeks following the end of the state of emergency on March 21, will show an uptick of cases due to the Olympics starting from the end of July, of which foreign spectators can’t be held accountable.

On the other hand, one must recognize that the Olympics avoided cancellation thanks to the anti-Covid vaccination (whose fast-paced development has a simple explanation). While still struggling with its own vaccination schedule, the Japanese government’s decision shows its denial of both a major scientific progress and the growing number of vaccinated people in the world.

One month after the beginning of Japan’s vaccination campaign, only 150,000 medical professionals have received their first shot, and nobody in the general population. In the meantime, the United States is vaccinating about 2 million people per day! Consequently, in July, only people aged 65 years and older will be protected in the archipelago (which is a high estimate given the delays until now), while the United States may create herd immunity, with thrice the population of Japan.

A diplomatic lapse, illogical and cruel

Let us remind the motivation behind Tokyo’s candidature to host the Olympic Games in 2012: the idea was to overcome "Fukushima" and show a country that succeeded to recover from a major natural disaster and nuclear accident, facing the future with the goal to become one of the most important touristic destination in the world. And Japan was already on the good track with a number of foreign visitors 5 times higher in 10 years (from 6.8 million in 2009 to 31.9 million in 2019), figures that were expected to double by 2030 (up to 60 million). This ambition was confirmed by Prime Minister Suga when he was appointed at the end of last summer.

The Rugby World Cup in autumn 🍁 2019 was a success, as international fans were perfectly received in a mastering of hospitality that positively impressed the world. However, the current protectionist decision to exclude overseas fans from the Olympics is a slam on the brakes for the opening dynamics.

The Japanese official communication is relentlessly explaining that most of Tohoku’s disaster-stricken areas are now safe for living. Kanpai is, by the way, frequently invited to take part in press tours in the north-east of Japan. That being the case, why is it not possible to welcome only 3% of the foreign visitors who came to Japan in 2019 at an event that was not held in Japan for 60 years? Is Covid-19 stronger than Fukushima’s radioactivity? Conspiracy theories are likely to feed on this involuntarily awkward message.

Regarding the contamination figures in Japan, about 1,000 confirmed-cases arise per day, a number 20 times inferior to France with twice the population. In other words, Japan officially records 40 times less cases on a constant population basis. And in a winter state of emergency, that will soon end, with no lockdown or curfew: bars, restaurants, gyms and cultural places all stayed open. Telework is strongly encouraged in large cities, and wearing face covering and other health protocols were already customary in Japan long before the advent of Covid.

The truth is that Japan is hindered by the ancestral fear of foreigners spreading virus (long before the Coronavirus crisis) to the point of totally forgetting the Olympic Games spirit and values. Except that History has already proven the xenophobes wrong a few months ago: the new virus variants were introduced in Japan in mid-December by Japanese businessmen back from the United Kingdom (without PCR test upon arrival), when borders were closed to foreign visitors.

Lastly, what about the athletes who trained for years and who must come alone to the Olympics, without the support of their families and friends? Moreover, they were even prevented to come earlier, get used to the place and train 🚅 in real conditions.

A bad impact on Japan’s image in the world

Until early 2020, Tokyo Olympic Games’ organization ran smoothly, with very efficient "Japanese style" protocols. Since the postponing however events tend to turn rather unfavorably. One of the biggest slap was the resignation of a thousand of volunteers after former Tokyo 2020 President Yoshiro Mori’s sexist blunder. More recently, it was decided that the Olympic torch relay will take place without spectators, even outdoors, and the run will be shortened. Fans are even asked not to travel between prefectures to attend the event, whereas the state-financed GoTo Travel campaign has promoted travels in the last half of 2020, spurring the winter contaminations.

What to think about the biggest international sport event whose host country prohibits the coming of overseas visitors in the same manner as in a rigid dictatorship? Instead of an event fostering fraternity for the world’s citizens, the discriminatory Games of parochialism and fear of the other will take place this summer. Tokyo 2020 2021 will thus be remembered as a self-segregated, ordinary competition devoid of its initial greatness and enthusiasm.

And China, Japan’s neighbor yet best rival, is likely to take advantage of that, as the winter Olympic Games are scheduled in Beijing in February 2022. China (the only country with a positive growth in 2020, notwithstanding the Coronavirus spread from there) may well take the opposite stance and welcome overseas spectators with open arms, providing now well-known precautions such as negative PCR tests, and eventually a vaccine passport. The offensive has already started: a few days after Japan's announcements China declared vaccines will be offered to every athletes in Tokyo 2021 and Beijing 2022.

Japan, many of us will naturally forgive your clumsiness and will visit again your wonderful country as soon as it will be possible, from autumn 2021, or possibly early 2022 due to your delayed vaccination program. But your lack of flexibility and your misunderstanding of the world’s human values shall not be forgotten.

Whereas the archipelago has been relatively spared until recently, it is now facing its first real health…

The 4th Covid Wave Demonstrated the Limits of the Japanese System

📈 New confirmed cases, victims…Japan’s record figures in a less-affected Asia The peak of the fourth wave… 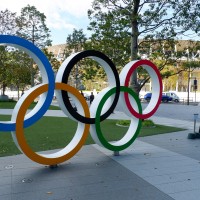