The Shrine Dedicated to Toshiie Maeda

Oyama-jinja is a Shinto shrine in Kanazawa, Ishikawa prefecture in Japan. It is dedicated to the memory of Toshiie Maeda (1538 – 1599), the first lord of the Maeda Clan to rule on Kanazawa’s area's former domain of Kaga, until 1868. Its main gate Shinmon features a unique architecture with Chinese and European influences.

Built in 1599, the shrine was initially named Utatsu Hachiman-gu and located at the foot of Mount Utatsu, in the east of Kanazawa City. It was only in 1873 at the beginning of the Meiji Era that it was moved to its current location at the west of the Castle 🏯’s park and renamed Oyama-jinja.

The shrine is easily accessible by bus from the JR station, thanks to its convenient location: between Nagamachi samurai district and Kanazawa-jo. The visit starts from the Shinmon gate, from west to east, and offers a direct access to the Castle’s park thanks to the bridge and the Nezumita-mon gate, the last rebuild parts inaugurated in July 2020.

Toshiie Maeda, the noble warrior who became a lord

Toshiie Maeda (1538 - 1599) was a long-time retainer of the great warlord (daimyo) Nobunaga Oda (1534 – 1582), a historical figure of the Sengoku period (1467 - 1615), considered as one of the 3 unifiers of the country. A simple infantry captain in the beginning, Toshiie quickly worked his way through the officers ranks and won important battles:

Toshiie Maeda became daimyo in 1583 and was the first lord of his lineage to rule over the Kaga domain. After his death, his eldest son Toshinaga decided to dedicate Oyama-jinja shrine to his memory, as well as to his mother’s, Toshiie beloved wife.

The unique architecture of Shinmon Gate

The entrance of the small Shinto enclosure is particularly highlighted by a quite steep stone stairway and the main gate called Shinmon, displaying an unusual architecture. Built in 1875, it results from the collaboration of Dutch designer Holtman and Kanazawa master carpenter Tsuda Kichinosuke. The gate is consequently a unique structure of Japanese, Chinese and European inspirations. Each level shows a different design with:

Stop a moment at the gate to admire its beautiful wood carving.

The shrine’s inner courtyard is home to the worship pavilion haiden and the main hall honden. On the right, the statue of Toshiie Maeda, clad in armor and riding a horse, reminds of the spirit enshrined here and of his importance in the city’s history.

The visit ends by Oyama-jinja’s peaceful gardens and especially the one called Gakki no Niwa, meaning the "garden of the music instruments". It was created by Kobori Enshu (1579 – 1647), a famous gardener and architect of the Azuchi Momoyama period (1568 - 1600). The elements and the shapes constituting the garden are said to be directly inspired from traditional music instruments used in the Gagaku, an ancient artistic and musical trend in Japan.

The Higashi Sanmon Gate marks the exit of the shrine’s grounds, and is smaller and entirely made of raw wood. Once standing in the enclosure of Kanazawa Castle, this gate survived many fires 🔥 and its longevity is thought to be due to the 2 spilling-water-dragons sculpted on its upper part.

⬇️ Further down this page, discover our visit guide in Oyama-jinja and around.
By Kanpai Updated on September 22, 2022 Oyama-jinja
Review this place Have you ever visited Oyama-jinja ? Share your opinion
Community's rating
5/5 (2 votes)

How to go to Oyama-jinja?

All year round, ideally in early June for the Hyakumangoku matsuri festival and for one hour

How to say Oyama-jinja in Japanese?

What to see near Oyama-jinja?

The Park Adorned With Sakura
Kanazawa Castle is a fortified architectural complex located in Kanazawa city, on the shore of the Sea of…
Kanpai's rating
~650m away

Art Exhibitions in Kanazawa
The 21st Century Museum of Contemporary Art, Kanazawa is located just in front of Kenroku-en garden and the…
Kanpai's rating
~800m away

Kanazawa's Beautiful Garden
Kenroku-en is one of three most beautiful gardens in Japan, located near Kanazawa Castle in Ishikawa…
Kanpai's rating
~850m away

The Nishida Family Garden in Kanazawa
Gyokusen-en is a Japanese garden located close to the famous Kenroku-en in Kanazawa. This little green haven…
Kanpai's rating
~1.23km away 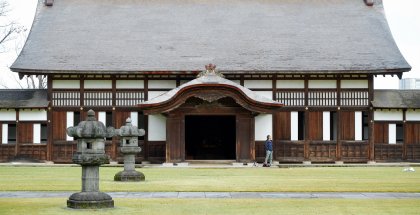 Oyama-jinja and the Kanpai Community