Female japanese-pop (jpop) groups have been taking serious blows for quite some time now, especially with the influx of Korean singers, who make the effort to sing in Japanese and to be very reactive in terms of regional marketing. But some Japanese leaders remain, such as Amuro Namie, Utada Hikaru, Ayumi Hamasaki, Koda Kumi or Morning Musume. In this list, the number-one selling female group is definitely AKB48, a girls band which started back in 2005. Their creator? A college teacher, head of the Kyoto University of Art and Design: Yasushi Akimoto.

AKB48's name is a reference to Akihabara, the famous electronics district of Tokyo. As for the figure, it represents the number of singers. Yes, you read correctly: AKB48 is composed of nearly fifty 'artists' whose youngest is 13 years old, divided into subgroups with team captains, interns, etc. Their success defies all reason, like their YouTube channel which has more than 420 million views. Their dedicated concert room in Akihabara is often sold out, goodies stores open all across Asia, most recently in Harajuku. They star in drama (Majisuka Gakuen and Sakura 🌸 Kara no Tegami) and the very group is emulated with success, among the best known:

This gigantic success obviously excites the otaku, at the point of creating absolutely crazy behaviors among fans. Because AKB48 are also known to organize gatherings where fans can shake their hands and slip a little note. The ladies have already complained about some fans who can be too dirty or agressive. Two of these otakus stand out from others: the first one bought 5,500 copies of the band's latest single in order to shake hands with girls that many times, spending almost 9 million Yen 💴 (more than US$100,000)... His sad record did not live for long, since an even crazier otaku spent 20 million yen (!) doing the same.

Behind AKB48, there's a huge marketing machine designed especially to capitalize on the sexy 🔞 side, and sometimes quite borderline. Because few of the fans probably like them only for their 'music'. AKB48's songs are dripping soup: melodies which have this amazing and unpleasant ability to stay indefinitely in your head, and the girls who sing a bunch of crap about love or the hard life of a teenage girl in Japan. Titles being Beginner, Everyday, Flying Get, or Sakura no Ki ni Narou...

The great strength of the group initiated by its producers, is rather to make the AKB48 ladies jiggle in bikinis, in their underwear or at least in a skirt, or cosplay, sometimes in very suggestive positions. If all their video clips show off a bit of sexy (let's be honest, what artist does not?), there is one of them that emerges from the others: Heavy Rotation in which clothing, poses and framing are *very* suggestive. You be the judge: 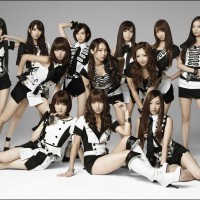 While the staggering popularity of J-pop group AKB48 is not declining, SDN48 aren't very famous yet. And for…