Sakaiminato is a port city in the San’in area, at the western end of Tottori prefecture on the coast of the Sea of Japan. The town has a reputation for its local fresh fish and crustaceans, but is also popular among the fans of Shigeru Mizuki, the city-born famous manga artist.

Sakaiminato, a port city in Tottori prefecture on the Sea of Japan, is not home to the usual Japanese hospitality, filled with smiles and bowing. Rather, visitors exiting the train 🚅 station are welcomed by spirits and other ghost-like creatures called yokai (妖怪) in Japanese.

Read more:
Yokai: Introducing Spirits of the Japanese Folklore - 👻 The Parade of Monsters and Ghosts

👻 The hometown of mangaka Shigeru Mizuki

As a matter of fact, the city’s streets exhibit no less than 177 bronze statues as a tribute to the strange characters imagined by famous mangaka Shigeru Mizuki (1922 - 2015). Born in Sakaiminato, the Japanese cartoonist is the world-renowned author of GeGeGe no Kitaro, a horror manga telling the adventures of Kitaro, a yokai hunter, that was adapted into several anime series, notably by Isao Takahata (1935 – 2018).

In the city, Mizuki’s fans are invited to a yokai themed stamp rally, with a stamp rally booklet to purchase at the Visitors Information Center at the exit of the JR station (¥500 (~US$3.83) as of June 2022). Stamps are to be collected along the Mizuki Shigeru Road, while shopping for local products.

The otaku pilgrimage in Sakaiminato ends by the Mizuki Shigeru Museum, opened since 2003. The place is dedicated both to the singular and diverse universe the mangaka created, and to the modern yokai spirits he invented. The exhibition is in Japanese but English language audio-guides are available. On a side note, there are 2 other pilgrimages cities focusing on famous mangas in Tottori prefecture: Hokuei, the hometown of Detective Conan’s author and Kurayoshi whose cityscape is featured in A Distant Neighborhood.

Sakaiminato has been known for its fishing port since the Middle Ages, and always was a trading hub between Continental Asia and the archipelago. The port city still benefits from a very good reputation regarding crab and red tuna fishing, and is therefore an interesting destination for amateurs of fresh fish and seafood. Food markets and many restaurants, directly established in front of the port, serve seasonal menus, according to the catch of the day.

The city also spread on the Yumigahama Peninsula, a bow shaped stretch of land, enjoyed by the locals for its sunsets on the Sea of Japan, as well as for water and sport activities. You will get a 360° panorama on this landscape from the Yumeminato Tower, whose name could be translated as "tower of the dream port". Its observation deck offers a view on:

The exploration of Sakaiminato continues with a detour by Shofuku-ji temple (正福寺), that also shelters a statue of one of Shigeru Mizuki’s characters. Then, reaching the Eshima Ohashi Bridge, that crosses Lake Nakaumi, offers a view on the city that has been very popular recently on the internet 📶. The lake marks the limit with Shimane prefecture and gives access to Matsue, a beautiful castle 🏯-town.

⬇️ Further down this page, discover our visit guide in Sakaiminato and around.
By Kanpai Updated on January 04, 2023 Sakaiminato
Review this place Have you ever visited Sakaiminato ? Share your opinion
Community's rating
4/5 (4 votes)

Our Pictures of Sakaiminato

How to go to Sakaiminato?

By JR train -- About 45 minutes from Yonago (reachable from Okayama or Tottori), Sakai JR Line, Sakaiminato Station (¥330 /~US$2.52 or free with the Japan Rail Pass)

Yumeminato Tower: Open every day (Closed on the 2nd Wednesday each month) from 9 a.m. to 6 p.m. (until 5 p.m. between October and March)

When to visit Sakaiminato?

All year round and for 1 day

How to say Sakaiminato in Japanese?

What to see near Sakaiminato?

A garden filled with peonies
Yushi-en is a Japanese garden located on Daikonshima Island, in the middle of Lake Nakaumi, northeast of…
Kanpai's rating
~17km away

One of the most beautiful examples of Japanese gardens
Adachi Art Museum is located in the Yasugi municipality, in the southeast suburb of Matsue, in Shimane…
Kanpai's rating
~18km away

A historical city at the water's edge
Matsue is the capital city of Shimane Prefecture, located along the Sea of Japan in the Chugoku region of…
Kanpai's rating
~51km away 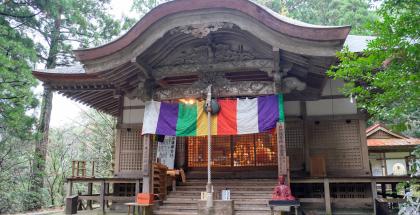 The Mystical Pilgrimage in Misasa
Sanbutsu-ji is a syncretistic complex located at 900 meters in altitude on Mount Mitoku, and attached to…
Kanpai's rating
~76km away

Shimane’s Mining Heritage
Oda is a Japanese city in Shimane prefecture, located on the shore of the Sea of Japan. While not popular…
Kanpai's rating
~86km away 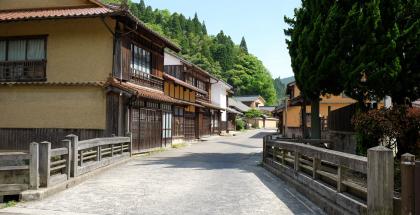 Omori’s Exceptional Mining Village
Iwami Ginzan is a former silver mine located in the south of Oda City, in Shimane prefecture in Japan. The…
Kanpai's rating
~88km away

Sakaiminato and the Kanpai Community