The Mystical Pilgrimage in Misasa

Sanbutsu-ji is a syncretistic complex located at 900 meters in altitude on Mount Mitoku, and attached to Misasa City, in Tottori prefecture, Japan. The place blends Buddhism and Shinto beliefs and was built in 706 under the influence of En no Gyoja (or En no Ozunu), the founder of the Shugendo, a spiritual ascetic practice.

Sanbutsu-ji is embedded on Mount Mitoku rocky cliffs and while it does display an important religious heritage, the complex’s layout clashes with the traditional temples and shrines. Patience, courage and humbleness are required to hike its off the beaten tracks pilgrimage trail. The major interest of the visit is indeed to climb the sacred mountain in the same mindset as the monks and religious, up to the Nageire-do, designated a National Treasure of Japan.

During a difficult one-hour walk, which is not supervised and can be dangerous in some places, hikers tread between rocks and century-old giant roots, and pass by several impressive constructions such as:

Monju-do is open to the visit and its stilt structure reminds of the Kiyomizu-dera. The most audacious will climb up to its narrow platform, which is not secured by any handrail, to admire an astounding view on the surrounding mountains.

The ascetic trail ends at the foot of Nageire-do, which is not open to public. This small wood pavilion, whose structure seems to have been delicately inserted in the rock, is only viewable from afar below. Mystery remains on how it was actually built, but according to the legend, the pavilion was literally thrown on the cliff using a transcendental power, an explanation that is still acknowledged by worshipers and guardians of the temple.

Visitors are welcomed by the jushoku head monk and his team of monks. The would-be climbers’ attire is checked to make sure it is suitable for continuing the trail, and monks offer recommendations. Traditional straw sandals that help walking safely on the earthen path and do not damage the roots are also available for purchase. Walking the path alone is not permitted, if so, one must wait for other visitors to arrive and join them.

Sanbutsu-ji is a significant place for Shugendo Buddhist sect, but is also a site where Shinto philosophy is deeply ingrained. Its location in a steep environment allowed its preservation from the strict enforcement of the State Shinto established during Meiji era (1868-1912).

Sanbutsu-ji’s main hall is located at the foot of Mount Mitoku, in a peaceful lush forest of huge cedar trees and soft green moss. Several other pavilions and Buddhist sculptures, along large stone stairways, complement the discovery of this wonderful pilgrimage place.

This article was written after a tour sponsored and organized by San'in Tourisme Organization. Kanpai has been invited and guided but keeps a total freedom of editorial content.
⬇️ Further down this page, discover our visit guide in Sanbutsu-ji and around.
By Kanpai Updated on September 16, 2021 Sanbutsu-ji
Review this place Have you ever visited Sanbutsu-ji ? Share your opinion
Community's rating
5/5 (2 votes)

How to go to Sanbutsu-ji?

Climbing may be forbidden between December to March in case of snow, and any time of the year depending on the weather condition

About half a day, with half the time for climbing

Ideal in summer or on a dry weather day

How to say Sanbutsu-ji in Japanese?

Temple's grounds at the foot of the mountain:

What to see near Sanbutsu-ji? 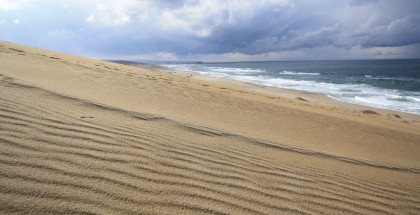 A sand desert along the Sea of Japan
The Tottori Sand Dunes are a small desert in Tottori prefecture in Japan's Chugoku region. Located at the…
Kanpai's rating
~30km away

Ephemeral Sculptures Exhibition
🚧 Limited Access
The only Japanese Sand Museum is located in Tottori, on the shores of the Sea of Japan, in Chugoku area…
Kanpai's rating
~69km away

One of the most beautiful examples of Japanese gardens
Adachi Art Museum is located in the Yasugi municipality, in the southeast suburb of Matsue, in Shimane…
Kanpai's rating
~71km away

A garden filled with peonies
Yushi-en is a Japanese garden located on Daikonshima Island, in the middle of Lake Nakaumi, northeast of…
Kanpai's rating
~72km away

The Highest Castle in Japan
Bitchu-Matsuyama Castle is a fortified monument located in Takahashi city’s downtown, in Okyama prefecture…
Kanpai's rating
~79km away 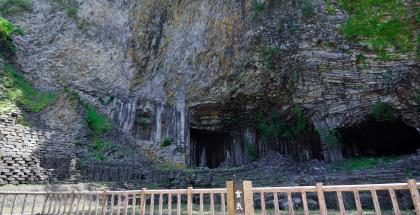 The Geological Experience in Kinosaki
Genbudo Caves are basalt caves located on the shore of Maruyama River, 5 kilometers south to Kinosaki, in…
Kanpai's rating
~81km away

Momotaro’s Shrine
Kibitsu-jinja is a great Shinto shrine located in the north-west of Okayama. Loved by the locals, it displays…
Kanpai's rating
~81km away

Sanbutsu-ji and the Kanpai Community