The great shrine in the heart of Yoyogi

Meiji-jingu is a vast shrine adjacent to Yoyogi Park, in Harajuku neighborhood, in Shibuya ward in Tokyo. Popular among tourists, ideal place for a traditional Japanese wedding ceremony as well as for New Year celebrations, this Shinto complex, renovated in 2016, is very lively all year round.

There are numerous green lungs accessible in Tokyo, the huge concrete city, including Shinjuku Gyoen gardens and Yoyogi Park. Meiji-jingu is just adjacent to Yoyogi and a must-see during your visit of Tokyo. Its access is a large walk lined up with sake 🍶 barrels.

Meiji-jingu is actually an immense Shinto complex, with a walk through the imperial garden (Meiji Jingû Gyoen) leading to it, and passing under the first great torii ⛩️. Then the tour continues through a hundred thousand trees forest, up to the inner courtyard that hosts several traditional weddings every weekend.

Contrary to what an unaware visitor may imagine, the construction of Meiji-jingu only dates back from the early 20th century. It was built to honor Emperor Meiji and Empress Shoken. On the day of its inauguration, on 1rst November 1920, about half a million of Japanese people visited the shrine. Nowaday, the shrine is especially popular during the New Year festivities, during which an average of 3 million Japanese come to pray.

Meiji-jingu is also the ideal spot for photographers adept of Shinto wedding ceremonies, and for every interested visitor

⬇️ Further down this page, discover our visit guide in Meiji-Jingu and around.
By Kanpai Updated on November 30, 2022 Meiji-jingu
Review this place Have you ever visited Meiji-Jingu ? Share your opinion
Community's rating
5/5 (8 votes)

Our Pictures of Meiji-Jingu

How to go to Meiji-Jingu?

When to visit Meiji-Jingu?

About an hour and more if there are weddings

How to say Meiji-Jingu in Japanese?

Open from sunrise to sunset. Specifically, the shrine closes at 4:30 p. m. (4 p. m. between November and February). Last entry half an hour before closing. 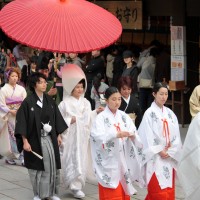 What to see near Meiji-Jingu?

The Pedestrian Mall at the South of the Station
Shinjuku Southern Terrace is an outdoor shopping alley located at Shinjuku station’s south exit, in the west…
Kanpai's rating
~1.25km away

Tokyo's Champs-Elysees
Omotesando is an avenue located between the famous Harajuku train station and its little sister Aoyama, in…
Kanpai's rating
~1.28km away

Cool shopping in Harajuku
I've already talked about how trendy Tokyo is, but people often think only of Takeshita Dori, the longest…
Kanpai's rating
~1.37km away

The National Imperial Garden in Tokyo
Shinjuku Gyoen National Garden is a large park located in the west of Tokyo, between Shinjuku and Sendagaya…
Kanpai's rating
~1.38km away

The Kawaii Shibuya Ride
Hachiko Bus is a public transport and touristic bus operating in Shibuya ward, in the west of Tokyo. With…
Kanpai's rating
~1.57km away

At the heart of the Japanese night
Shinjuku is one of Tokyo's most famous districts for several reasons. First, the Metropolitan Government…
Kanpai's rating
~1.60km away

Meiji-Jingu and the Kanpai Community