One of the prospective Sumos’ daily duty is keiko or practice. It is held every morning at the stable or beya, to which the wrestlers are affiliated. Several Sumo schools can be found in Tokyo’s Ryogoku district and its surroundings, and it is possible to attend a training session, if complying with a couple of strict rules. Arashio Beya is one of those Sumo stables, located in the heart of the capital.

On the mornings of training sessions, Arashio Beya is easily recognizable from the street. A group of people is usually respectfully observing the training wrestlers from large windows, under which numerous bicycles are lined up. Patience is the key to find an observation spot in case of late arrival. The characteristic and advantage of Arashio Beya is that onlookers must watch from outside the building, along the sidewalk. It is thus possible to watch only a part of the training and leave when desired to continue the visit of the district and its small temples. However, some rules must be followed to attend this rare spectacle:

Behind the dohyo, the sacred ring, a dozen of sumo trainees waits for their turn, their towels hanging behind them on the wall. The sound of the bodies colliding is predominant, like during the great national tournaments. It is not easy to guess who will win one of those mini matches, repeated over and over. After a few bouts, the wrestlers exit the circle, wipe their forehead, and move away to let two other wrestlers enter the ring. A bucket of water is at the athletes disposal to drink from large ladles between two rounds.

The hand-to-hand fights aim to sharpen the wrestler’s techniques, and the strict training to reinforce muscle density. From time to time, one of them whacks a large wooden pillar in an angle of the room. This a fortification training called teppo: the rikishi squats and hits the pillar with his palm in a down to up movement. The same gesture can be used during tournaments to hit the opponent and shove him, to make him lose balance and fall 🍁 or walk back.

Prospective sumos also strengthen their legs with long squatting exercises. Strong legs are essential for wrestlers, as they need to lean on them to keep balance when an adversary strikes. Legs flexibility is as important as legs muscles and the shiko training helps developing it. It is even one of the first exercises the trainees learn: from a squatting position, the apprentice raises one of his legs in a split and slams it back into the ground. Then he does the same with the other leg and repeats the process again and again. This exercise is primarily meant to strengthen the wrestler, but also has a prophylactic role as it is said to ward off evil spirits.

Training usually happens without any word, except for a couple of advices from the coach, who is often a former rikishi himself. The contemplation of sumo training is impressive and feels like a privileged peek in the wrestlers’ intimacy. The stable’s scenery is a precious snapshot of life with numerous details: while the foreground is occupied by wrestling trainees, the younger ones in the background carefully wrap their joints in straps.

At the end of the training session, wrestlers simply leave, and walk away in the street dressed in their training attire. Some of them are quite popular, and the respect Japanese people, as well as foreign visitors, feel for them is palpable. Neighboring dwellers and shopkeepers come from 7:30 a.m. to observe a few moments or just give an affectionate glance through the windows.

Rikishi apprentices have their morning busy with trainings until noon, when they take their first meal of the day. The Japanese hierarchy system is of course strongly respected in the stables as well. Thus, the highest-ranking wrestler is served first: it is only when the Yokozuna has finished his meal that the other lower-ranking wrestlers can start to eat.

After a hearty meal, wrestlers take a nap in order to quicken their weight increase. Life resumes after the nap, with the usual chores, that are also distributed according to ranking: the newest are in charge of tidying up, grocery shopping, and sunbathing the mawashi loincloths, that should not be washed. They can use their little free time to go out, have a rest watching TV or indulge in their hobbies. Then back to the chores, with the preparation of the evening meal, after which they sleep, in a dormitory for the lowest-ranking ones. Higher-ranking wrestlers can have their own room, and even live outside the stable if they earn a salary, when they reach the juryo grade.

Gourmet visitors can continue their tour in the sumo district with a degustation of chanko-nabe, the wrestlers’ favorite hearty hot-pot.

Our Pictures of Sumo Wrestlers' Training

How to go to Sumo Wrestlers' Training?

With Tokyo Metro -- Toei Shinjuku Line, Hamacho Station, then walk 5 minutes along the park towards south, then turn right after a little temple

Where is Sumo Wrestlers' Training?

When to visit Sumo Wrestlers' Training?

At least one hour

Less crowded in early morning at the opening

How to say Sumo Wrestlers' Training in Japanese?

Practice session from 7:30 a. m. to 10 a. m., only in February, April, June, August, October and December, outside tournaments periods.

Call Arashio Beya the day before your intended visit (between 4 p. m. and 8 p. m., in Japanese) to make sure a training will take place the following morning. Be aware that Arashio Beya can modify or cancel their open sessions at any time, and until the last minute.

Reservation is not compulsory 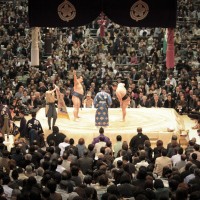 What to see near Sumo Wrestlers' Training?

The Stroll Garden in the East of Tokyo
Kiyosumi Teien is a Japanese garden located in Kiyosumi-Shirakawa district, in Koto ward opening on Tokyo Bay…
Kanpai's rating
~1.27km away

The Historical Capital’s Reconstitution
🚧 Renovation in Progress
Edo-Tokyo Museum is located in Ryogoku area in eastern Tokyo. Opened in 1993 and renovated in 2018, it offers…
Kanpai's rating
~1.27km away

Historical Boat Ride on Tokyo’s Rivers
Nihombashi Cruise is a boat ride on the Sumida River, starting from its pier at Nihonbashi bridge located in…
Kanpai's rating
~1.52km away

The Ukiyo-e Master’s Collection
The Sumida Hokusai Museum is located in the easternmost part of Ryogoku district in Tokyo’s Sumida ward. This…
Kanpai's rating
~1.60km away

The Leiji Matsumoto Boat Ride in Tokyo
Himiko Cruise is a themed boat ride on the Sumida River, between Asakusa and Odaiba in the east of Tokyo. The…
Kanpai's rating
~1.68km away

The Historical Landmark of Edo’s Main Roads
🚧 Renovation in Progress
Nihonbashi is a historical district located at the east of Tokyo Station, in the center of Japan’s capital…
Kanpai's rating
~1.84km away

The otaku experience
During our previous trips to Japan, we had never had the opportunity of attempting the Maid café experience…
Kanpai's rating
~1.89km away

Tokyo’s electric town for geeks and otaku
Akihabara is one of the most famous districts in Japan’s capital city. It is especially popular with geeks…
Kanpai's rating
~1.96km away 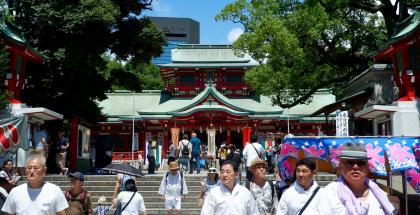 Tokyo’s Prominent Shrine Forsaken by Tourists
Tomioka Hachiman-gu is a Shinto shrine in Koto ward, at the east of downtown Tokyo. Dedicated to the god of…
Kanpai's rating