There has been greater volcanic activity than usual over the years 2014 - 2015 in Japan:

Such recent high-profile events are a useful reminder of the fact that Japan’s temperamental natural environment is not just subject to earthquakes, typhoons 🌀 and tsunamis.

Japanese Volcanoes are Closely Monitored, and Yet Potentially Unpredictable

It is part of the missions of the indispensable Japan Meteorological Agency (JMA) to monitor the volcanoes of the archipelago. Danger is measured on a 1 to 5 alert scale. From level 3 upward (4 Japanese volcanoes are currently at level 3), instructions are pretty simple: "Keep away". Level 5 involves the immediate evacuation of neighbouring populations.

A volcano 🌋 is considered active if its last eruption occurred within the last ten thousand years. According to this classification, there are 110 active volcanoes (7% of which are subterranean) and 47 of them may possibly erupt in the course of the 21st century.

According to the JMA, at least ten people died or were reported missing in each of the eruptions of twenty volcanoes since the 18th century. In the deadliest of all, which occurred at Mount Suzen, west of Kyushu, in July 1792, lava flows and earthquakes caused the death of about 15,000 people.

Despite permanent – yet seriously impaired in recent years owing to research budget cuts – monitoring, only major eruptions have yielded definite information. It is therefore simply impossible for vulcanologists to anticipate each and every eruption.

According to specialists, however, an earthquake of strong magnitude, such as the one that occurred on 11 March 2011, automatically causes magma to accumulate, thus increasing the risk of an eruption taking place in the surrounding area. This would explain why volcanic activity has been intensifying over the past few years.

As of the beginning of August 2015, a new emergency warning system for the 47 volcanoes mentioned above will come into operation. Emergency warnings will be issued to residents and hikers (via cellphones and/or municipal loudspeakers) five minutes before the beginning of an eruption in order to allow them to get away before it actually starts.

In the spring 🌸 of 2018, the JMA defines several volcanoes that present a regular risk of ash, lava flows and volcanic gases:

Another Facet of Volcanic Activity: Mount Fuji and Onsen

The most famous of all volcanoes, Mount Fuji 🗻, being dormant rather than extinct, is obviously one of the most closely watched. The number of visitors who climb it during the 11 summer weeks when it is officially opened approximates three hundred thousand and an eruption would likely wreak havoc.

Read more:
Climbing Mt Fuji - Experience and Guide to the Top of the Sacred Mountain

According to several studies, the city of Tokyo, located some hundred kilometers to the north-east, might be impacted by the projection of pyroclastic fragments and become covered in a layer of ash several centimeters thick in the event of unfavorable wind conditions. The last eruption of Fuji-san dates back to 1707.

There is, however, a good side to such buoying volcanic activity in Japan as it allows onsen ♨️, i.e. underground hot springs, to form. There are over 3,000 of those across the country and they have long been a source of delights for Japanese people and, in recent years, for foreign tourists.

Experience and Guide to the Top of the Sacred Mountain
The ascension of Mount Fuji is a hike on the sides of Fuji-san up to its summit located 3,776 meters above…
Kanpai's rating

The Touristic Tour of Lake Ashi
Hakone is a town of Kanagawa prefecture, located 80 kilometers to the south-west of Tokyo. Tourists like this…
Kanpai's rating 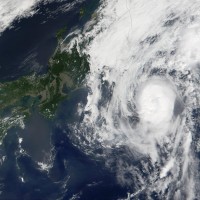 A Guide to Typhoons in Japan

Every year, especially in the summer, Japan gets hit by several typhoons that sometimes make the front page…

Tsuyu: the Rainy Season in Japan

Tsuyu is the Japanese word to describe the rainy season in Japan. This period usually begins in mid-June and…