Kabuki is a traditional form of Japanese theater popular in the archipelago. While influenced by Noh drama and Bunraku puppet theater in its early days, Kabuki successfully created its own very specific codes throughout its 400 years of history. One of its characteristics is that all roles are played by male actors. Kabuki theater was inscribed on the UNESCO List of the Intangible Cultural Heritage of Humanity in 2008.

The term Kabuki is written with the ideograms 歌 (ka), 舞 (bu) and 伎 (ki), respectively meaning "sing","dance" and "technique" or "art." In the everyday speech, the word "kabuki" can also convey the idea of extravaganza to a certain extent, of something out of the ordinary or non-standard.

An art of unclear origins

As was the case with theater in its early days in Europe, Kabuki and its performers were often negatively considered, even more as they mainly worked in the red-light districts, and limits with prostitution were often blurred. Ironically, it was the authorities’ numerous interventions that helped shape Kabuki into its current form:

It was also in the second half of the 17th century that acting took precedence over dance.

Kabuki theater culminated in the 18th and 19th and was the embodiment of the Japanese people’s hedonistic mind. It was at the core of the Edo period (1603-1868) popular culture and pictured in literature as well as in ukiyo-e prints. Actors’ troupes began to organize during this period, gained social visibility and gathered in families who carried on styles and a theater repertoire until today. Attempts of reforms and censorships to try ruling Kabuki into a more "respectable" art such as Noh or Bunraku lasted until Meiji Era (1868-1912).

Some actors, such as Ichikawa Danjuro I, were so popular that they could prompt their admirers to engage in pilgrimages. Thanks to him being affiliated to Narita-san Shinsho-ji temple, this place of worship developed and thrived in the 18th century.

A Kabuki play is characterized by the show being on stage as well as in the public.

The 28-meters long stage is usually extended on the left of the spectators by a perpendicular walkway (of 24 meters long and 1,5 meters wide), called Hanamichi (花道), or the "flowers path." A set of complex machineries, developed throughout the centuries, allow to make actors disappear suddenly, easily change the settings, replicate a landscape, or create striking special effects. All these features contribute to a dynamic and creative stage production within the audience and viewable for everyone.

One of the acting characteristics in Kabuki is a flat tone of the voice, often high-pitched and looking for exaggeration. Actors combine dance movements, mime, and their gestures are underlined by the sound of traditional music instruments. Kabuki favors stylized demeanors, especially a static posing called "mie" (見得), translating the personality and feelings of a character, and that is known today thanks to woodblock prints picturing popular actors.

The make-up of Kabuki actors is also very specific: the skin is usually covered with a white foundation, on which colors are applied to show the character’s particularities. Masks 😷 are occasionally used, but not to the extent of Noh Theater. Accessories and flamboyant costumes, some of them weighing more than 10kg and often made with precious materials with intricate designs, are elements of the show. Part of the performance also consists in moving naturally while wearing these garments.

As a popular art form, Kabuki plays are usually performed in a relaxed atmosphere. The audience does not restrain its applause to demonstrate its happiness when shown very well-played scenes or the one it expected. When the public’s favorite actor appears, he is encouraged with kakegoe (掛け声). It is a practice of shouting the stage name or family name (yago 屋号) of a actors to cheer on them.

Nowadays, the public is often constituted by seasoned Kabuki amateurs who are fond of one or several actors, of acting styles and / or of some plays that they love to see again and again. As the plays can last several hours, regular spectators bring their own meal, and it is even possible to eat at the venue. Theaters even have bento 🍱 supplies to purchase at intermissions.

The Kabuki repertoire, primarily originating from the puppet theater’s, expanded thanks to original creations, especially with the dramas written by Chikamatsu Monzaemon (1653-1725). The plays mainly recall historical events, romances, and love affairs. Therefore, there are three main genres in the repertoire:

A commitment to modernity

Kabuki has always been concerned with remaining at the forefront of modernity, especially on the technical aspects with importations and improvements of stage equipment.

The debate on the women’s place on stage has also been growing recently and the younger generations are not hostile to actresses playing bishonen (美少年 "beautiful young men") roles. However, many purists consider that the essence and beauty of Kabuki lie in the perfection of the feminine incarnation by male actors. Kabuki may not be ready yet to open to women, however one can consider its counterpart, the Takarazuka Revue, created in 1913, where all roles are played by women as if mirroring Kabuki.

Such inertia was probably fostered by the fact that Kabuki troupes are actually "family businesses," with artists’ names passed down from generation to generation. Among the most famous are the Otani, Bando, Nakamura, Matsumoto, or Ichikawa families, who each have developed an acting style or cultivated skills for specific roles.

The revivification in the 1980s

It is by the way from one of the Ichikawa family branches that part of the current popularity of Kabuki originates. Ichikawa Ennosuke III created in 1986 the Super Kabuki, with the intent of attracting a larger audience while still playing the classical Kabuki dramas with the usual techniques, but also adding Chinese classics, or popular Japanese tales, and by using the state-of-the-art stage techniques during performances. His successor Ennosuke IV revived the concept in 2014 with Super Kabuki II (Second) that opened the repertoire to an even larger audience. Thus, popular mangas such as One Piece or Naruto had some of their famous narrative arcs transcribed into plays, and virtual idol Hatsune Miku’s hologram even performed in a 18th century classic.

At the end of 2019, one of the current Kabuki stars, Ichikawa Ebizo XI, adapted Star Wars, of which he is a great fan, for a one-time performance with his son.

Where to watch a Kabuki play and how much is it?

When traveling in Japan, it is easy to watch a play at the two theaters below:

Both theaters are managed by the famous Shochiku company, which is also a big movie producer.

Depending on the seat category and the length of the play, the ticket prices range between ~US$16.93 and ~US$115.11. Booking can be made at the theater:

It is almost impossible to watch a full-length play, as they can be very long (some could last nearly 30 hours!). Nowadays, theaters tend to stage a selection of scenes, from the most popular or representative, but it is not unusual to spend a full day at the venue, only interrupted by intermissions for eating.

Theaters have adapted and now sell tickets to attend to only one act, to experience Kabuki without too many constraints. To better enjoy a play, it is recommended to read about its story line beforehand, or to read the program provided by the theater.

It is sometimes possible to watch Kabuki performances in streets festivals in Japan, such as Chichibu Yomatsuri Matsuri in December in the north-west of Tokyo.

Kabuki theater is truly an immersion in Japanese culture, that blooms in this one-of-a-kind art, between excess, baroque lyricism, extravaganza, and tradition. The most modern dramas are accessible even to neophytes who can enjoy the performance without any concern of not understanding Japanese or being bored. 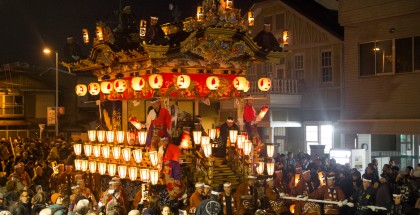 One of the most beautiful night parades in Japan
Chichibu Matsuri is a Shinto festival of feature floats, occurring every December 2nd and 3rd, next to…
Kanpai's rating

The impressive Zen entrance to Kyoto
Nanzen-ji is an important Buddhist temple of the Japanese Zen Rinzai school, nestled among vegetation at the…
Kanpai's rating