Narita-san Shinsho-ji is a vast complex of the Shingon School of Buddhism located in Narita city, near the international airport. A thousand years old, the temple’s history began in the 10th century during Heian Period (794-1185), and culminated in Edo period (1603-1868) thanks to its links with Kabuki Theater. Wisdom King Fudo Myoo is worshipped, and five buildings were designed Japan’s Cultural Properties.

Narita-san Shinsho-ji was built in 940 by Kancho, a disciple of Kukai (774-835), named Kobo Daishi after his death, who was a very important Buddhist monk in Japan’s religious history and the founder of the Shingon School.

In the 10th century, Japan’s emperor had to face the rebellion of the powerful Taira clan. He thus ordered Kancho to bring an image of Fudo Myoo (king of wisdom and fire 🔥), a deity of the Buddhist pantheon, on the war area so it can intercede on his behalf to end the troubles. This image was said to have been carved by Kobo Daishi himself. Kancho prayed and performed rituals with it during three weeks before the rebellion was defeated. According to the legend, when Kancho tried to return the statue to Heian-kyo (former name of Kyoto), it was impossible to move and it even ordered the monk to let it stay in Narita to protect its inhabitants. Shinsho-ji temple was thus built to shelter this Fudo Myoo image.

The site was extended to its actual size in the 18th century, under the influence of Ichikawa Danjuro 1rst, a very famous actor of Kabuki Theater, a traditional and popular art in the Edo period. Danjuro, originating from Narita’s area, was a worshipper of Fudo Myoo and incited his audience to visit the temple for pilgrimage. Thus began the success of the temple and of the city of Narita. A shopping district developed at the entrance of Shinsho-ji to welcome worshippers. Nowadays, visitors can still enjoy the same "retro"ambiance when walking down the main street Omotesando to access the temple’s grounds.

A visit in three stages

One enter Narita-san Shinsho-ji through two huge wooden gates, the Somon Gate and the Niomon Gate. Under the later an impressive paper lantern 🏮 is hanging, colored in a brilliant red that reminds the one in Senso-ji temple in Asakusa. A wide plaza then opens on a higher ground. On the right, a three-storied pagoda stands, with wonderful painted decorations under its roofs. The stroll to the impressive Daihondo Great Main Hall is pleasant. Lucky visitors can even attend to beautiful Buddhist ceremonies there.

To the west of the plaza, Shaka-do pavilion is worth the detour. It used to be Narita-san’s main hall. Next to it is a small Inari shrine, made of metal and wood, contrasting with the ancient aspect of the temple. Its small lanterns and purple fabrics hanging from the ceiling give it an enjoyable vernacular charm.

A second plaza opens behind the Daihondo Great Main Hall and is home to the ancient places of worship Gakudo and Komyodo, whose wooden architecture is well preserved. This intermediary level then leads to the "top" of the visit, at the foot of the flamboyant Great Pagoda of Peace, which might be the most remarkable construction of the complex. This two-storied pagoda was recently built, in 1984, to shelter a colorful Fudo Myoo statue, representing the divinity with its usual attributes:

From this place, visitors can also enjoy a beautiful view on the temple and Narita city downwards.

After the visit of Shinsho-ji, the path continues in a great stairway going down to a fountain and to the entrance to Narita-san Park, a pleasant public green space arranged around several ponds and a calligraphy museum.

On foot -- ~15 minutes from Narita JR or Keisei stations

Visit of the buildings on daytime only

The Relaxing Environment of the Temple-City
Narita-san Park spreads in the continuity of Shinsho-ji temple in Narita City’s downtown. This vast haven of…
Kanpai's rating
~7km away

The International Gateway to Tokyo
Narita Airport is the place where most travelers first set foot on Japanese soil. It was opened in May 1978 …
Kanpai's rating
~21km away 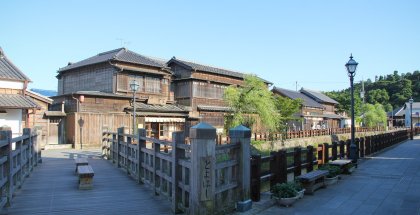 The Beautiful Little Edo by the Water in Chiba
Sawara is the historical district of Katori City in Chiba prefecture. Thriving during the Edo period (1603 –…
Kanpai's rating
~23km away

One of the Largest Buddha in the World
Ushiku Daibutsu is a monumental bronze sculpture of Buddha Amitabha, located in Ushiku City, Ibaraki…
Kanpai's rating
~24km away

Experience a breath-taking flight over Tokyo
If you are a regular Kanpai reader, you will know that I am particularly fond of high vantage points. It does…
Kanpai's rating
~43km away 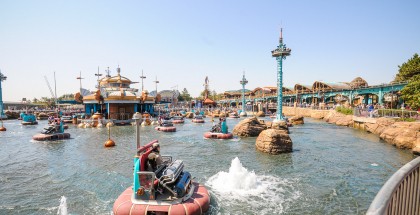