The Great Shrine in Kamishichiken

Kitano Tenmangu is a major Shinto shrine located in the north-west of Kyoto. It is the first of 12,000 spiritual places dedicated to Tenjin, the deified Sugawara no Michizane. The shrine is adjoining the Kamishichiken Geisha district and is famous for its tea ceremony performed by Maiko in February, under 1,500 plum trees in bloom.

Sugawara no Michizane was an intellectual, poet and an influential politician at the imperial court of Heian. His rivals from the Fujiwara clan succeeded in having him unfairly exiled in Dazaifu in Kyushu in 901. According to the legend, not long after he passed away, a series of great natural disaster and mysterious deaths struck Kyoto and especially Emperor Daigo’s family.

Kitano Tenmangu was established in 947 to soothe Sugawara’s vengeful spirit. After the posthumous reestablishing of his honor, he was then deified in 986, under the name of Tenjin; It was the first time a human being was elevated to the status of a god. He became the god of honesty and sincerity, able to dismiss false accusations. Tenjin is nowadays considered the deity (kami) of studying and success in studies, thus respected and maybe worshipped by all the students in the country, especially during exam periods.

The entrance to Kitano Tenmangu is quite impressive, with its huge stone torii ⛩️ gate, with two komainu, the dog-wolves guardians. A paved alleyway then unfolds, bordered by numerous stone lanterns 🏮 and sculptures of oxen, Tenjin’s messengers for prayers against disasters.

Built in 1607 by Toyotomi Hideyoshi, the main worshipping building and the others connected pavilions are listed National Treasure of Japan. The architectural style is of Azuchi-Momoyama period (1573-1603), namely a solid, dark red wood architecture. Moreover, the wonderful metal and paper lanterns suspended under the cypress bark roofs, covered in moss, bolster the elegance of the architectural complex.

The blooming of Sugawara’s plum trees in February

Kitano Tenmangu is, by the way, a popular and busy shrine, organizing and hosting several great annual festivities. It is thus highly recommended to visit the place in February:

Each month, on the 25th, the shrine also hosts one of the most important flea markets in Kyoto, named Tenjin Matsuri.

Around July 7, for Tanabata 🎋 Stars festival, the shrine’s alleyways are ornamented with bamboos bouquets with small multicolored cards attached, named tanzaku, on which people write down their wish. When exams periods draw near, many students come to pray by ringing the shrine’s bell in the hope of attracting good luck.

Kitano Tenmangu’s park houses about 350 Japanese maple trees, that can best be admired from the end of November to the beginnings of December during koyo 🍁 season.

⬇️ Further down this page, discover our visit guide in Kitano Tenmangu and around.
By Kanpai Updated on February 15, 2021 Kitano Tenmangu
Review this place Have you ever visited Kitano Tenmangu ? Share your opinion
Community's rating
5/5 (6 votes)

Our Pictures of Kitano Tenmangu

How to go to Kitano Tenmangu?

Where is Kitano Tenmangu?

When to visit Kitano Tenmangu?

How to say Kitano Tenmangu in Japanese?

What to see near Kitano Tenmangu?

The Cherry Trees Festival in the North of Kyoto
🚧 Recent Natural Disaster
Hirano-jinja is a small Shinto shrine located in Kita ward, near the Golden Pavilion in the north-west of…
Kanpai's rating
~1.05km away

Kyoto’s Golden Pavilion Temple
Kinkaku-ji is the vernacular name of Rokuon-ji, a Buddhist temple located in the north of Kyoto. The famous…
Kanpai's rating
~1.58km away

The contemplative stone garden
Ryoan-ji is a Buddhist temple of the Rinzai Zen sect, located at the foot of the mountain Kinugasa-yama,…
Kanpai's rating
~1.73km away

A Zen temple village in Kyoto
Daitoku-ji is a temple complex of Zen Buddhism Rinzai school located in the northwest of Kyoto, Japan. It is…
Kanpai's rating
~1.94km away

The Imperial Temple in the North-west of Kyoto
Ninna-ji is a Buddhist temple of the Shingon sect’s Omuro School, located near Mount Kinugasayama, in the…
Kanpai's rating
~2.20km away

The Former Tokugawa Shogunate Residence
🚧 Renovation in Progress
Nijo-jo is a Japanese castle located in downtown Kyoto. Built in 1603 for shogun Tokugawa Ieyasu, it was the…
Kanpai's rating
~2.39km away 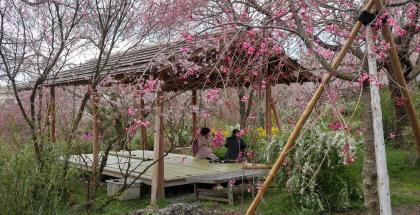 The Wild Cherry Trees Forest in Kyoto
Haradani-en is a private garden on a hill behind the Golden Pavilion, in the north-west of Kyoto. Only open…
Kanpai's rating
~2.54km away

The Emperor’s Former Residence
Kyoto Imperial Palace is located in Kyoto Gyoen, a 63-hectare park in the heart of the city. The palace was…
Kanpai's rating
~2.64km away 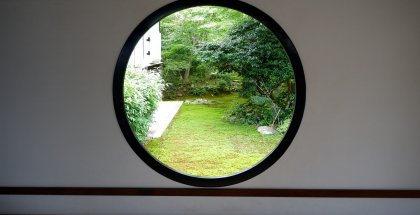 Zen Windows Opening on Maple Trees
Genko-an is a small Zen Buddhist temple of the Soto sect located in the north-west of Kyoto. While the autumn…
Kanpai's rating

Kitano Tenmangu and the Kanpai Community