The discreet and magnificent point of view over Kyoto

Shogun-zuka is a Japanese mound located on the peak of Mt. Higashiyama in the southeastern part of Kyoto. A hiking trail starts at Shoren-in Temple. The area is famous for Seiryu-den Temple, followed by the majestic observatory deck overlooking the former imperial city.

From a Western point of view, we could replace the adjective "discreet" with "secret." Indeed, Shogunzuka, one of the most beautiful observation decks in Kyoto, remains largely unknown by non-Japanese people for one reason: no public transportation runs to this location. That is enough to eliminate the spot from almost all international tourist guides about the city.

Both converge on the entrance parking lot, where high-end cars 🚙 and taxis come and go with discretion.

From an administrative point of view, Shogunzuka belongs to Shoren-in Temple, located at the feet of the mountain, in Yamashina ward. Its name (literally "the Shogun’s mound") comes from the year 794, when Emperor Kanmu decided to bury a 2.5-meter-long clay statue of a lord there to protect Kyoto. Due to its location and the panoramic view it offers, the hill served as a strategic point during local battles and as an anti-air base during WWII.

The terrace and its temple ground

Today, the main goal of the visit is the northern wooden terrace, renovated in 2014, which occupies a surface about 5 times bigger than Kiyomisu-dera’s teahouse. Nested at 220 meters above sea level, this observation deck offers a breathtaking view of the whole heart of the former capital and the vast forests of its eastern areas.

From April 2015 to September 2017, Shogunzuka has become best known for a surprising exhibition. Called 光庵 Kôan (literally "light shelter"), this Glass Tea House, opened April 4th, 2015, initially should have stayed only one year. Built by the designer Yoshioka Tokujin after a creative work lasting 5 years, the famous piece of art celebrates the 50th anniversary of the twinning between sister cities Kyoto and Florence.

This iconoclastic creation tries to catch the essence of the Japanese perception and aesthetic. Depending on the intensity brought by the season, the weather or the time of day, passing through its light spectrum reveals delightful and surprising luminous aspects.

This unexpected yet successful contrast between an artistic tea house and an historical building characteristic of Kyoto (Seiryu-den Temple) offers a show warmly recommended. To add some good points, the glass benches stay cool, offering a very pleasant feeling when the temperature rises in summer months.

The Glass Tea House Kou-An by Tokujin Yoshioka is currently removed from Shogunzuka mound. This artwork is actually travelling across Japan and will be exposed in two main art exhibitions:

When continuing their discovery of Shogunzuka, visitors go to an aging metallic platform. A little out of the center and higher up, it offers a second deck for observing the buildings described earlier.

The linear promenade toward the exit leads to a beautiful Japanese garden, well-maintained, completing the already lovely discovery.

⬇️ Further down this page, discover our visit guide in Shogunzuka and around.
By Kanpai Updated on September 10, 2021 Shogunzuka
Review this place Have you ever visited Shogunzuka ? Share your opinion
Community's rating
5/5 (5 votes)

How to go to Shogunzuka?

By bus -- #70 Keihan, only weekends and public holidays

How to say Shogunzuka in Japanese?

What to see near Shogunzuka? 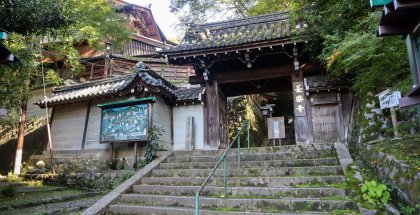 Maruyama’s Small Hidden Temple
🚧 Limited Access
Choraku-ji is a small Buddhist temple located behind Maruyama Park, on the heights of Higashiyama in the east…
Kanpai's rating
~600m away

The Maple and Bamboo Temple in Kyoto
Kodai-ji is a temple of the Rinzai School of Japanese Buddhism, located in Higashiyama in the east of Kyoto…
Kanpai's rating
~600m away

The Monumental Temple in the Hills
Chion-in is a Buddhist temple located near Maruyama Park in the heights of Higashiyama, in the south-east of…
Kanpai's rating
~700m away

Lotus and Camphor Trees in the Heart of Higashiyama
Shoren-in is a Buddhist temple of the Tendai school, located at the foot of Mount Awata, in Higashiyama, in…
Kanpai's rating
~750m away

The Great Shrine in Gion
Yasaka Jinja is a Shinto shrine located at the end of the large Shijo-dori shopping avenue, east of Gion,…
Kanpai's rating
~850m away

The great water temple in Kyoto
Kiyomizu-dera is a syncretic place of worship associating a Buddhist temple and a shinto shrine, located in…
Kanpai's rating

Shogunzuka and the Kanpai Community