The Shopping Arcades in Downtown Kyoto

Teramachi and Shinkyogoku are covered walkways and shopping arcades located between Shijo and Sanjo avenues in central Kyoto. They consist of a maze of shops and typical restaurants, and are a must-visit to immerse in downtown Kyoto’s merchant atmosphere. Inhabitants and tourists enjoy strolling in this covered passages, especially on the weekends.

Teramachi is certainly more famous than Shinkyogoku, but the latter and their adjacent streets are also worth the visit. Located at Kawaramachi, near Kamogawa River, the two covered walkways are several meters long each . They offer a range of various shops, more affordable than Shijo’s and more oriented towards the general public.

Strolling under the covered arcades

Consequently, Teramachi and Shinkyogoku have a lot of clothing shops aimed at young people, and Japanese style accessories. There are of course many kinds of restaurants and cafés, as well as old tea shops. ¥100 shops align with traditional and modern boutiques, among which souvenir shops are plenty.

The historical atmosphere is present thanks to shops' windows decorated in an old-fashion style and remaining shrines and temples here and there! As a matter of fact Teramachi (literally "temple town") was first dedicated to places of worship when it was built during Sengoku era, in the second half of 16th century, by warlord Toyotomi Hideyoshi, one of Japan’s three unifiers.

It was only during Meiji Era (1868-1912) that the first shops opened, mainly to sell local craft. The passage then evolved to its present state with a clean tiled floor able to withstand crowds of Japanese and foreign tourists, or locals, especially on the weekend. However, the growing importance of tourism industry in this area is reflected by the most recent shops that do not sell authentic souvenirs anymore. The ambient sounds have changed as well, with announcements made in Chinese, in Korean and even in French in addition to Japanese.

Continue the visit south in Nishiki-dori, the perpendicular street famous for its food market.

Ideal on a rainy day

The Wild Duck River in Kyoto
Kamogawa is a Japanese river running in Kyoto from north to south, in Kansai area. Inhabitants and tourists…
Kanpai's rating
~900m away

The Emperor’s Former Residence
Kyoto Imperial Palace is located in Kyoto Gyoen, a 63-hectare park in the heart of the city. The palace was…
Kanpai's rating
~1.10km away

The 300,000 Japanese Comic Books Library
The International Manga Museum is a library dedicated to the Japanese Ninth Art, located in the center of…
Kanpai's rating
~1.23km away 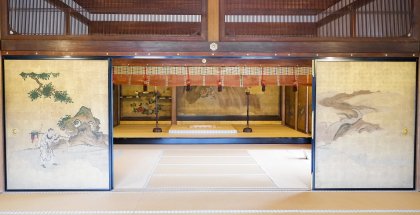 The Imperial Temple Displaying Ornamental Paintings
Shogo-in is a Buddhist temple and the official headquarter of the Shugendo Honzan branch, located in the east…
Kanpai's rating
~1.24km away

The Green Contemporary Mall in the Heart of Kyoto
Shinpuhkan is a shopping mall located on Karasuma-dori avenue in the center of Kyoto. Once the Old Kyoto…
Kanpai's rating
~1.24km away

A Must-see for Martial Arts Enthusiasts
Butokuden is the main hall of the Budo Center, located just next to Heian-Jingu shrine in the east of Kyoto…
Kanpai's rating
~1.37km away

The Golden Torii Shrine
Mikane-jinja is a small neighborhood shinto shrine located in a residential area north to downtown Kyoto. It…
Kanpai's rating
~1.40km away

Kyoto's Weeping Cherry Trees Shrine
Heian-jingu is a Shinto shrine located in the north-east of Kyoto. The sacred complex was built in 1895 and…
Kanpai's rating
~1.40km away

The Hexagonal Temple in Kyoto’s Urban Center
Rokkaku-do is a small Buddhist temple nestled among the buildings of Shijo district, in the south of Karasuma…
Kanpai's rating