Art and Nature in Odawara

Enoura Observatory is an open-air art museum located in the south of Odawara City. Facing Sagami Bay, in a steep area between the sea and the mountains, it was designed by contemporary architect Hiroshi Sugimoto, in a successful association of Japanese art and of the rocky coastline’s precipitous nature.

Born in 1948 in Tokyo, Hiroshi Sugimoto studied fine arts in the United States and settled in New York. He first worked as a photographer before becoming an internationally famous contemporary architect. In 2009, he founded the Odawara Art Fondation in the Japanese town dear to his heart to promote Japanese culture beyond the archipelago’s frontiers.

In 2017, he completed the design of Enoura Observatory, that spreads on a 9,500m² superficies, on the upper side of the rocky coast. Visitors walking its paths discover a collection of buildings skillfully blended in the wild landscape of Odawara southern coast.

Take the train 🚅 for a few kilometers ride from Odawara central JR station to discover this beautiful open-air contemporary art museum, with as a bonus an unobstructed view on the ocean.

The entrance to Enoura is marked by the Muromachi period (1336 - 1573) Meigetsu Gate, that was formerly located in Kamakura’s Kencho-ji temple. Then the museum’s reception building is illuminated by the natural light, thanks to its entirely glassed walls giving the impression of still being outdoor. Its center displays an impressive cedar tree table made of a wood older than a thousand years.

Outside, the artworks are exhibited in a green environment perfectly associating with the raw materials used, such as stone, steel, and glass. The sun beams and their seasonal orientations were carefully leveraged to enhance specific constructions depending on the solstices. Among the most remarkable structures are:

Additionally, several elements of the traditional Japanese culture are gathered, such as a beautiful bamboo grove and its slightly dark path, captivating even on a clear weather day. At a turn in the path stands a stone torii ⛩️ gate, then a little Japanese garden and an ochaya teahouse whose roofing is made of corrugated tin salvaged from an old local citrus warehouse and creates a lovely melody when the rain ☔️ falls on it.

In total, at least fifty installations, large or small, modern or ancient, are to be admired. The map provided at the start of the visit helps finding the way and also gives English explanations on the exhibition.

Admissions to Enoura Observatory are limited, and it is highly recommended to book a ticket online beforehand to make sure to visit on the desired day. In return, one can enjoy the museum almost by oneself, amid nature and far from the touristic bustling of Odawara. The feeling of serenity provided is so rare that it must be emphasized.

Despite its location on the side of a cliff, the course is relatively short and does not require specific efforts, just walking and climbing a few stairways and small inclines.

Enoura Observatory is mainly suitable for an adult audience, interested in contemporary art and amateur of Japan’s traditional architecture, whose elements are cleverly blended in a landscape of natural wild beauty, between the sea and the mountain.

⬇️ Further down this page, discover our visit guide in Enoura Observatory and around.
By Kanpai Updated on June 13, 2022 Observatoire Enoura
Review this place Have you ever visited Enoura Observatory ? Share your opinion
Community's rating
4.60/5 (5 votes)

Our Pictures of Enoura Observatory

How to go to Enoura Observatory?

Where is Enoura Observatory?

When to visit Enoura Observatory?

All year round and for two hours

How to say Enoura Observatory in Japanese?

Closed on Tuesday and Wednesday

What to see near Enoura Observatory?

Contemporary art in nature
Hakone Open-Air Museum is a unique exhibition area opened in 1969, located in the heart of Hakone area's…
Kanpai's rating
~7km away 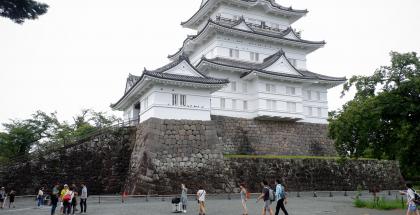 The Beautiful Reconstruction of a Former Feudal Domain
Odawara Castle is a fortified monument located in the eponymous city in Kanagawa prefecture, south-west to…
Kanpai's rating
~10km away

The Great Shrine Wrapped in Forest on the Shores of Lake Ashi
Hakone-jinja is a shinto shrine located in Hakone city, in Kanagawa prefecture in Japan. Its main pavilion,…
Kanpai's rating
~10km away

National Treasures on the Heights of Atami
MOA Museum of Art is a private art gallery located on the heights of Atami, in Izu peninsula. Its founder…
Kanpai's rating
~10km away 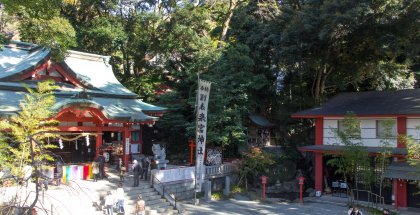 Pilgrimage to the Giant Camphor Tree
Kinomiya-jinja is a Shinto shrine located in the upper part of Atami, in the north-east of Izu peninsula…
Kanpai's rating
~11km away

Hakone’s View of Mount Fuji
Ashi Lake is located in Hakone, Kanagawa prefecture, in Japan. Situated in a volcanic crater 21 kilometers in…
Kanpai's rating
~12km away

The Touristic Tour of Lake Ashi
Hakone is a town of Kanagawa prefecture, located 80 kilometers to the south-west of Tokyo. Tourists like this…
Kanpai's rating

Enoura Observatory and the Kanpai Community