The Largest Saltwater Tank in Japan

Okinawa Churaumi Aquarium is located at the western end of Motobu peninsula, on Honto, the Japanese tropical archipelago’s main island. With a 7,500m3 seawater tank home to a whale shark and manta rays, it is one of the largest aquariums in the world. Inaugurated in 2002, it constitutes the major attraction of Ocean Expo Park, an exhibition site showcasing the abundance of the local wildlife.

Okinawa archipelago is renowned for fine sand beaches 🏖 and healthy cuisine, but it is also home to an extraordinarily varied marine wildlife, with rare species, and is therefore fragile. To comprehend the extent of this vulnerability, we recommend to directly dive into the turquoise sea of Okinawa and admire tropical fish and corals in their natural habitat. Many options are available to book an underwater diving session with a guide or to snorkel in shallow waters.

Those who prefer staying ashore can visit Churaumi, Japan’s largest aquarium located on Motobu peninsula, in the center of Okinawa’s main island Honto, at 90 kilometers north to Naha, the regional capital. Established in the Ocean Park Expo, which was the former site of the International Ocean Exposition, Okinawa 1975, the aquarium was inaugurated in 2002 to restore the destination’s touristic attractiveness.

The visit course in the aquarium is divided into several sections, including:

Churaumi’s highlight is its huge water tank of 7,500m3 capacity named "Kuroshio Sea" after the warm ocean current flowing along the archipelago. Behind the large glass walls, large, majestic species such as the whale shark and the manta ray can be observed living in captivity. The view is impressive for children as well as for adults, from all points of view: at the foot of the glassed tank, sitting on the bleachers or nestled in an alcove to watch fish swimming above one’s head.

However, it is important to remember that to fill this large aquarium, the species are captured in the wild. There are even panels explaining how to catch a whale shark. On a side note, until 2021, there were 2 whale sharks in Churaumi, but sadly one died during the Coronavirus 🦠 pandemic and the establishment’s subsequent sanitary closure.

Additional attractions on the seaside

Exiting the aquarium, the visit continues in the large Ocean Expo Park hugging the seaside and pleasantly facing the small volcanic island of Ie-jima. The green space is complemented with several facilities, such as:
• An outdoor children playground,
• Several food trucks for snacking,
• Lush botanical gardens, and,
• The reproduction of a traditional village.

Open-air water tanks dedicated to sea turtles, dolphins and manatees are also open to the public. The show is free, and it is possible to feed the animals for a fee. We do not recommend these attractions however for the negative image of animals confined in spaces too small for them they give.

A major attraction in Okinawa archipelago, Churaumi is also one of the largest aquariums in the world. On the other hand and despite their size, its installations do not seem to appropriately take into account the concepts of animal ethics and well-being for the species exhibited.

Our Pictures of Okinawa Churaumi Aquarium

How to go to Okinawa Churaumi Aquarium?

Where is Okinawa Churaumi Aquarium?

When to visit Okinawa Churaumi Aquarium?

How to say Okinawa Churaumi Aquarium in Japanese?

What to see near Okinawa Churaumi Aquarium?

Karate's cradle in Okinawa
🚧 Reconstruction in Progress
Shuri Castle, or "Shuri-jo" in Japanese, is an ancient royal palace located in Shuri city, near Okinawa…
Kanpai's rating
~56km away

Okinawa’s Japanese Gardens
Shikina-en is a large garden of a 4,2 hectares superficies located in Naha, on the main island of Okinawa in…
Kanpai's rating
~63km away

The Beautiful Beach on Okinawa Honto
Mibaru is a beach located near Nanjo city in the south-east of Okinawa Island, the main island of the…
Kanpai's rating
~66km away 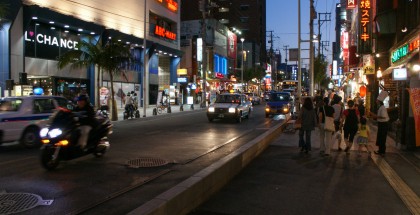 Okinawa’s capital city
Naha is the capital of Okinawa prefecture, located on the southwestern coast of Honto, the main island of…
Kanpai's rating
~77km away 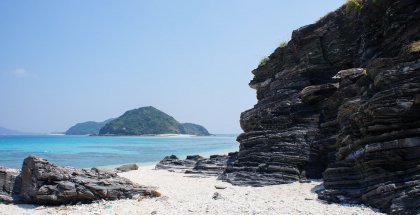 🏖 Okinawa's Paradisiac Island
Zamami is one of the Kerama Islands in the Ryukyu archipelago, in Okinawa prefecture, at the south…
Kanpai's rating