Otaguro Park is a Japanese style garden in Suginami ward, in the west of Tokyo. A popular all-year neighborhood promenade, its beauty is enhanced by the color change of its many Japanese maple trees’ foliage in autumn. During the fall season, beautiful evening light-ups illuminate the park, creating an enchanting nightly stroll.

Concealed in the heart of Ogikubo quiet residential area in the West of the capital, Otaguro Park is very much enjoyed by the neighborhood as a place to relax everyday. The park, slightly smaller than one hectare (2,5 acres), was arranged in a Japanese promenade garden, and was initially part of music critic Motoo Otaguro (1893 - 1979)’s estate, which was subsequently bequeathed to Suginami ward. Its entrance is free.

A relaxing walk around a pond

A beautiful ginkgo biloba alley opens the park and goes through a small lovely wooden gate of Japanese style. Then, visitors walk along a stream, bordered by large trees and thickets, flowing into a little pond, the central element of the park around which are gathered all the traditional Japanese garden’s tokens, including:

There, take a couple of minutes to admire the scenery and listen to the birds’ singing from the trees. Grey starlings, Oriental tits and Japanese white-eye can be heard, among other species.

The nearby Motoo Otaguro Memorial, a Western style construction with a red bricks facade, used to be Otaguro’s working office, and is a nice complement to the visit.

In autumn, the red foliage (koyo) of the Japanese maple trees (momiji 🍁) and the yellow leaves of the gingko biloba give the park a warm and elegant touch. The glowing colors are further enhanced at the end of the afternoon when the setting sun illuminates the trees.

Consequently the number of visitors increases during the peak foliage and the park slowly enlivens, especially at dusk just before the beginning of the night illuminations to which the red maple trees beauty is brought out. Some wait for the light-up at the small tea house where they enjoy a comforting matcha green tea with a wagashi traditional confectionary. A hot drinks vending machine is also available to help endure the coldness of the night.

The garden’s night illuminations in autumn

During a few days, from 5 p.m. between late November to early December, Otaguro Park transforms into a fairy tale-like universe. Effects on light and darkness create a wonderful promenade.

The maple trees red hues become even more intense than in daytime and the crossing the small stone bridge feels magic. The mirror effect on the water is particularly stunning, with the colored foliage reflected in a perfect symmetry. Visitors are welcomed at the entrance by beautiful golden lights, placed in diagonally cut bamboo stems scattered on the sides of the path.

Half an hour before sunset, Otaguro Park is then invaded by Japanese garden photographs amateurs, who make sure to take place at the best shooting spots. Most of them are Japanese elderly men who use cameras 📷 specific for night photography (and they sometimes fiercely defend their newfound picturesque territory!). Tripods are all over the place, despite the park’s guards constantly reminding the limit of one tripod per visitor.

Attendance is however a lot lower than in Rikugi-en, the garden in the north of Tokyo famous for its night illuminations in autumn. And even though the crowd could built up a little bit, it quickly thins out as times goes by. We recommend continuing the evening stroll in the streets surrounding Asagaya and Ogikubo stations, an area with many good restaurants to enjoy dinner after this pleasant night visit.

Beside the fall season however, Otaguro Park is not a must-see.

⬇️ Further down this page, discover our visit guide in Otaguro Park and around.
By Kanpai Updated on November 15, 2021 Parc Otaguro
Review this place Have you ever visited Otaguro Park ? Share your opinion
Community's rating
4/5 (1 vote)

Our Pictures of Otaguro Park

How to go to Otaguro Park?

By train -- Chuo Line, Ogikubo JR station (10 to 20 minutes from JR Shinjuku or Tokyo) then 10 minutes' walk from the station's south exit

When to visit Otaguro Park?

All year round, ideally in autumn and during one hour

How to say Otaguro Park in Japanese?

What to see near Otaguro Park? 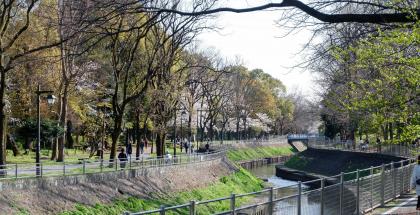 Sakura Along the River in Western Tokyo
Zenpukuji-gawa is a river crossing Suginami ward, in the west of Tokyo. The river meanders in the capital’s…
Kanpai's rating
~1.87km away

The Anime Neighborhood
Suginami Animation Museum is located in the eponymous ward, in the north-west of Tokyo. Opened in 2005, its…
Kanpai's rating
~2.22km away

One of the Most Popular Neighborhoods in Tokyo
Koenji is a district of Suginami ward, located to the west of central Tokyo. The shopping streets sprawling…
Kanpai's rating
~3.81km away

The Alternative to Akihabara for Otaku Shopping
Nakano Broadway is a shopping mall located at the exit of Nakano station, a few minutes from Shinjuku in the…
Kanpai's rating
~4.05km away

A pleasant suburb of Tokyo
Kichijoji is a district of Musashino City, on the western part of Tokyo. With its relaxed and urban…
Kanpai's rating
~4.62km away

The Great Park in Kichijoji
Inokashira is a public park located between Mitaka and Musashino, in Tokyo’s western suburb. Served by the…
Kanpai's rating
~4.94km away

A Wonderful Tribute to Miyazaki and Takahata
Ghibli Museum is dedicated to the Japanese animation studio of the same name, and located in Inokashira Park…
Kanpai's rating
~5km away

Nakai Area Traditional Fabric Dyeing Festival
Some no Komichi is a festival dedicated to Japanese fabric dyeing in Nakai district, in Ochiai in the north…
Kanpai's rating

Otaguro Park and the Kanpai Community