Iya Valley, part of Miyoshi City, is located in the western part of Shikoku Island’s Tokushima prefecture. Every year, an increasing number of tourists dive into the mountainous forests, searching for a glimpse of undisturbed nature, especially the last suspended vine bridges above rapid streams.

In Iya, visitors can discover another side of Japan: a magical, rural place far from Tokyo and the country’s other big cities. At night, tanuki and boars frequently cross local roads.

Western Iya (Nishi-Iya) is quite easy to reach, and although the Eastern Iya (Higashi-Iya or Oku-Iya) is a little further, it is still worth the detour.

There were initially 13 bridges throughout Iya Valley, but only 3 remain today. They are suspended from cedar trees by steel cables covered with vine. They used to be only made by mountain vines (kazurabashi) but have been reinforced due to increased tourist traffic.

The most famous and easy-to-access bridge is Iya-Kazurabashi. It is 45 meters long and is suspended 14 meters above the river. Crossing the bridge is not advisable for people with a fear of heights, as our pictures below will show. Moreover, Husband Bridge (Ottonohashi) and Wife Bridge (Tsumanohashi), located in Oku-Iya (Niju-Kazurabashi), are 44 and 22 meters long, respectively.

Nearby in Oku-Iya and Nishi-Iya, rivers and waterfalls refresh visitors during the summer.

Ochiai is a part of Iya Valley and features traditional houses, fields and numerous historical paths. The remote village is built directly on the mountainside on 8 levels. It is possible to sleep there to enjoy a fantastic view in the morning. The atmosphere is quite exceptional.

Therefore, many travelers like to come in Ochiai to spend the night in one of these traditional houses. In winter, they also like to taste a delicious boar meat hot pot (botan nabe) to warm up after a day of excursions in the prefecture.

Who does not know Brussels’ Manneken-Pis? Iya Valley also has its own. In terms of location and landscape, Iya’s is superior, as it is perched atop a 200-meter cliff above the river!

This visit article has been written after a tour organized and sponsored by the Tourist Information Center of Tokushima Prefecture. Kanpai has been invited and guided but keeps a total freedom of editorial content.
⬇️ Further down this page, discover our visit guide in Iya Valley and around.
By Kanpai Updated on December 15, 2021 Vallée d’Iya
Review this place Have you ever visited Iya Valley ? Share your opinion
Community's rating
5/5 (6 votes)

Our Pictures of Iya Valley

How to go to Iya Valley?

By bus -- Local bus lines (2 to 8 per day depending on the weekday and the season):

Where is Iya Valley?

When to visit Iya Valley?

How to say Iya Valley in Japanese?

Where to stay in Iya Valley? 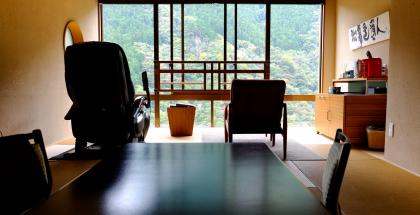 The Secluded Luxurious Ryokan and Baths in the Valley
Iya Onsen is a Japanese hot spring hotel, located on a side of Iya Valley in the mountains of Shikoku, and…
Kanpai's rating 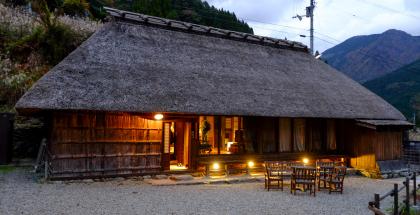 What to see near Iya Valley?

The Gorges Near Iya Valley
Oboke and Koboke are two consecutive gorges upstream Yoshino River, near the entrance of Iya Valley in the…
Kanpai's rating
~20km away

The Sword Mountain in Shikoku
Mount Tsurugi is the second highest mountain on Shikoku island, at 1,955 meters above sea level, located in…
Kanpai's rating
~35km away

The Merchant Town in Mima
Udatsu no Machinami is a former merchant’s district located in Mima, in Tokushima prefecture on Shikoku…
Kanpai's rating
~46km away 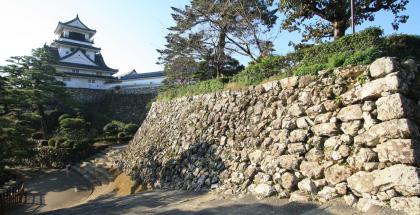 The Best Preserved of the 12 Original Castles
Kochi Castle is a fortified monument in the center of the eponymous city, in the south of Shikoku Island in…
Kanpai's rating
~46km away

The Sublime Japanese Park in Takamatsu
Ritsurin Koen is a vast 185-acre Japanese garden dating back to the 17th century, located in Takamatsu, on…
Kanpai's rating
~53km away

Iya Valley and the Kanpai Community