Akatsuka Botanical Garden is a small park in Narimasu district of Itabashi ward, in the north-west of Tokyo. With its 600 different vegetal species, it is the ideal place for Japanese trees, plants, and flowers amateurs. Blooming take turns from spring to autumn to enliven the visit.

The western part of Tokyo is mainly residential and green, allowing the city dwellers to escape from the bustling megalopolis and reconnect with nature. In addition to Tokyo’s Great Buddha in Joren-ji, Narimasu district encompasses several green spaces located on the former Musashino wood estate assembled under the name of "Akatsuka".

The Park is divided in several areas and stretches along a highway, while displaying several interesting places:

Despite the proximity of car 🚙 traffic, the park is very pleasant and welcomes the neighborhood’s families on the weekend.

Historical heritage in the botanical garden

In the south of Akatsuka Joshi Park and hidden in the residential streets, Akatsuka Botanical Garden has opened to the public in 1981. Like a living library, it allows the study and the contemplation of 600 tree species, plants, and various flowers, concentrated on a single hectare superficies. It is a real pleasure to be surrounded by nature and smell the wooden or flowery perfumes.

The path winds through landscapes and seasons, with staged blooming from spring 🌸 to autumn 🍁, and even holly in winter. Several smaller spaces are thus arranged, and the most remarkable are:

After this escape in a past-time era, the come back to the urban reality is slowly made transitioning through smaller quiet residential areas, until Narimasu station and its typical shops crammed along the tracks.

Our Pictures of Akatsuka Botanical Garden

How to go to Akatsuka Botanical Garden?

On foot -- from the nearest stations:

Where is Akatsuka Botanical Garden?

When to visit Akatsuka Botanical Garden?

From spring to autumn and during one to two hours

How to say Akatsuka Botanical Garden in Japanese?

Annual closure from December 29 to January 3

What to see near Akatsuka Botanical Garden? 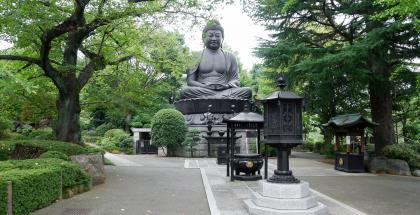 Tokyo’s Great Buddha
Joren-ji is a Buddhist temple located in Itabashi ward, in the north-western suburb of the Japanese capital…
Kanpai's rating
~7km away

A maple tree forest at Tokyo's doorstep
Heirin-ji is the biggest temple of the Zen Buddhism Rinzai school in the Kanto area, located in Niiza city in…
Kanpai's rating
~8km away

The Magnitude 7 Earthquake Simulator
Bosaikan is a Japanese public facility for risk preparedness and first-aid training, located in Ikebukuro,…
Kanpai's rating
~8km away

The Northern entertainment district
Ikebukuro is a big district of the Toshima area, in the North-West of the Japanese capital. Very lively, it…
Kanpai's rating
~8km away

The alternative to Akihabara otaku shopping
When speaking about electronic or "otaku" neighborhoods in Tokyo, everyone immediately thinks of Akihabara. …
Kanpai's rating
~8km away

Nakai Area Traditional Fabric Dyeing Festival
Some no Komichi is a festival dedicated to Japanese fabric dyeing in Nakai district, in Ochiai in the north…
Kanpai's rating
~8km away