The Japanese garden next to Tokyo Dome

Koishikawa Korakuen is a Japanese garden located near Tokyo Dome in Bunkyo ward, in the center of the capital of Japan. The walk around a pond was imagined in the beginning of Edo period by Tokugawa family’s Mito branch. The landscape is wonderful all year round, and especially in autumn for the contemplation of maple trees red foliage.

The many parks and Japanese gardens growing in Tokyo allow to escape from the capital’s madness, and constitute this never-ending megalopolis’ green lungs, as proves Koishikawa Korakuen.

One of the oldest Japanese gardens in Tokyo

On a quite central location in the capital, Koishikawa Korakuen is north to the Imperial Palace and Kitanomaru Park and contiguous to Tokyo Dome, the large stadium / concert hall.

The walking paths wind around the garden’s main pond, with Tokyo Dome City and other neighboring modern buildings almost always occupying the background. Yet Koishikawa Korakuen is one of the oldest Japanese gardens in Tokyo as it dates back to the 17th century, the early Edo period (1603 – 1868).

Nice during the plum trees blossom and the fall color season

The visit of Koishikawa Korakuen is particularly recommended:

Note that there is another Korakuen located in Okayama, near Shikoku Island. It is by the way one of the Three Great Gardens of Japan.

Our Pictures of Koishikawa Korakuen

How to go to Koishikawa Korakuen?

Where is Koishikawa Korakuen?

When to visit Koishikawa Korakuen?

One to two hours

How to say Koishikawa Korakuen in Japanese?

Closed from December 29 to January 1st

Free guided tours on Saturdays, Sundays and holidays at 11 a.m. and 2 p.m.

What to see near Koishikawa Korakuen?

Baseball Mecca and Thrilling Rides
Tokyo Dome is a stadium located in Bunkyo ward in the north of Tokyo. It can shelter up to 55,000 spectators,…
Kanpai's rating
~400m away

The Hidden Shrine of Weeping Plum Trees
Ushi-Tenjin Kitano-jinja is a small Shinto shrine located in Bunkyo ward, in the north of downtown Tokyo…
Kanpai's rating
~550m away

The discreet observatory at the heart of Tokyo
Shinjuku City Hall (Tocho) seems to be the most famous spot to shoot aerial photos of Tokyo. Let me introduce…
Kanpai's rating
~800m away

Tokyo's heart
Chiyoda is the central district of Tokyo, in the heart of the Japanese capital. Almost fully surrounded by…
Kanpai's rating
~1.31km away

The Ultimate Reference for Sakura in Tokyo
Yasukuni-jinja is a Shinto shrine located near the Imperial Palace in Chiyoda ward in the heart of Tokyo…
Kanpai's rating
~1.34km away

Chiyoda Sakura in Tokyo
Chidorigafuchi is an alley hugging the moat located in the north-west of the Imperial Palace, in Chiyoda ward…
Kanpai's rating
~1.45km away 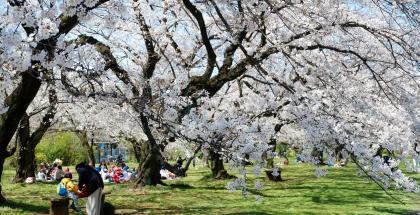 Tokyo’s Famous Scientific Arboretum
Koishikawa Botanical Garden is located in Bunkyo ward, in the north of Tokyo. Operated by The University of…
Kanpai's rating

Koishikawa Korakuen and the Kanpai Community