👻 The Dead and Ghost Festival in Japan

Obon is a period usually around mid-August in Japan for celebrations and Buddhist rituals. These few days are one of the short national holidays during which the Japanese gather with their families to commemorate their deceased relatives and their ancestors.

Summer is the season of ghosts, but it has another specific meaning for many Japanese people: this is indeed the time of Obon (or O-bon), the occasion to reunite with family and to come back to one’s furusato hometown, for a few days of holidays, usually between August 10 and 15. Like the Golden Week, this time of the year is naturally characterized by traffic jams and full trains 🚅, as everybody is traveling at the same time.

Obon is a very popular family celebration blending cult of the ancestors and Buddhist principles to commemorate fore-bearers and departed relatives. Its name is a reference to the tray 盆 (bon) onto which the offerings for the deceased are placed. In Japan, its celebration in summer was probably established as soon as the 8th century.

It is documented that Obon was celebrated on the 14th and 15th days of the 7th month of the ancient lunar calendar at least from the 17th century and throughout the Edo Period (1603 – 1868). It is by the way at this time that the concept of "Obon holidays" ( お盆休み Obon yasumi) appeared, consisting of taking a few consecutive days break on this occasion. The dates were officially set from the 14th to the 16th starting 1872, but they were canceled the following year with the introduction of the Gregorian calendar.

According to this new calendar, Obon should have taken place in mid-July. However, it created a gap with the Shinto rituals that were still based on the former lunar calendar, and at this period, most of the Japanese were busy with the high season of agricultural works. Many regions therefore settled their ancestors’ celebrations on August 15, a date that is sometimes called tsuki-okure bon (月遅れ盆, "one-month late bon").

Afterward, the holidays’ official distribution throughout the year was revised several times, but Obon’s dates were never reintroduced. Over time, it was the Japanese population itself that developed the habit of taking days off apart from bank holidays for this celebration, and the date gradually settled around August 15, which nowadays also conveniently overlaps children’s summer school holidays.

That is how today Japan officially celebrates Obon in mid-August, with nonetheless many regional variations. Some places indeed still celebrate the former bon on July 15 or on the weekend following this date:

Other dates are also possible between June to August in the regions still following the former lunar calendar.

How to celebrate Obon in Japan?

Obon is characterized by a noticeable break in activities for 3 to 4 days, but the rituals start as soon as the first day of the month and continue throughout it, be it July or August. According to ancient Chinese Taoist beliefs, all the deceased must go to Hell, a place shaped like a giant cauldron. The first day of the month is called Kamabuta tsuitachi (釜蓋朔日), a word play meaning "[first] day of the cauldron’s lid opening": the gate of Hell indeed opens, letting the deceased’ souls escape and start a long journey to come back to their relatives. The living therefore start preparing to welcome them back.

As soon as the 1rst day of the month, people visit and tidy up the graves at the cemetery. In the house, the butsudan altar that shelters the deceased’s Buddhist tablets is also cleaned up and the Obon lanterns 🏮 (盆提灯 Bonchôchin) are installed.

From the 7th day (七夕 or 棚幡 Tanabata 🎋), an altar to receive the souls (精霊棚 shôryôdana) during their stay is arranged. Depending on the regions, the household, or the space available in the house, it displays:

A Buddhist monk can also read sutras in front of the butsudan and the shôryôdana.

On the 13th day, the Mukaebi (迎え火) or "welcoming fires 🔥" are materialized by lanterns lit up to guide deceased relatives and help them come back home.

The ancestors’ spirits are therefore expected to arrive in the middle of the month. The happiness of reuniting on one hand, and the joy of temporarily escaping from the torments of the underworld on the other hand, are expressed during the evenings of the 15th and 16th in the Bon Odori dances (盆踊り).

These nocturnal dances initially took place in the temples and shrines’ grounds. Nowadays, they can be performed in any public place large enough to build a small temporary tower called yagura, topped with a drum that gives the rhythm. The place is light up with numerous lanterns and there are also the traditional street-food stalls in a matsuri festival ambiance. Anyone can don a yukata 👘 or a traditional costume to perform a simple choreography while dancing around the tower.

Specific festivals are also staged, such as Tokushima’s Awa-Odori, where professional dance groups perform in the street.

On the 16th day’s night, it is the time for the spirits to go back to their place in the netherworld. The living show them the way and bid them farewell by lighting huge Okuribi fires (送り火 , "farewell fires") or setting afloat lanterns in a river (灯籠流し Tôrô nagashi). The departure can also be highlighted by fireworks 🎆. The travel back period can last until the end of the month, depending on the regions. However, offerings and altars prepared for Obon are put away as soon as the end of the 16th day, or the next day at the latest.

The first Obon (初盆 hatsu bon or 新盆 nii bon) is celebrated at least 49 days after someone passes away.

Where to attend Obon in Japan?

Obon is indeed a family celebration, but some events are public, especially at the occasion of the Okuribi:

Those who would like to discover this tradition in a more quiet and contemplative way can also visit a Buddhist temple or a Shinto shrine and immerse in the Okuribi’s illuminations, such as in Adashino Nenbutsu-ji temple in Kyoto, or at the Chugen-Mantoro festival in Nara’s Kasuga Taisha shrine. 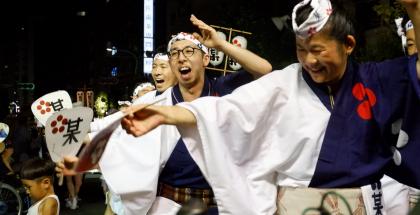 The Great Traditional Dance Festival in Tokyo
Koenji Awa-Odori is a traditional dance festival taking place each year in August in Koenji district, in the…
Kanpai's rating 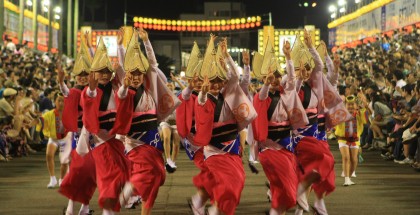 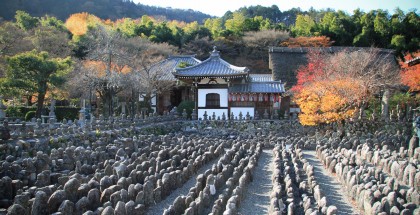 The 8.000 Buddhist Statues Temple in Arashiyama
Adashino Nenbutsuji is a Buddhist temple located on a hill is Sagano district, the north-western suburb of…
Kanpai's rating 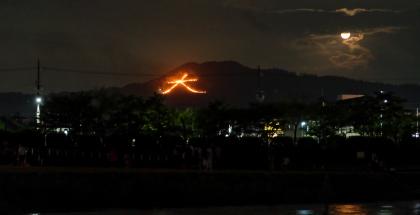 🔥 Daimonji’s Giant Bonfire Festival
Gozan no Okuribi is a bonfire festival in Kyoto, held each year on August 16 to celebrate the end of Obon,…
Kanpai's rating

Remembrance in the Heart of Tokyo
Aoyama Cemetery is a public graveyard managed by Tokyo Metropolitan Government and located in Minato ward, in…
Kanpai's rating 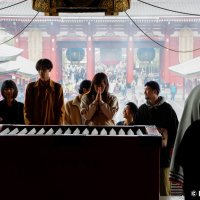 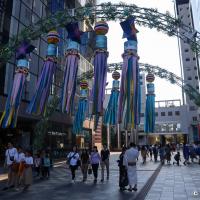