The Temple to Japanese Train Culture

Kyoto Railway Museum is located in Umekoji Park, about twenty minutes’ walk to the west of Kyoto JR station. It recounts the history of Japanese railways innovations with an interactive and edutainment approach. Inaugurated on April 29, 2016, it is the more recent and largest train museum in Japan.

Kyoto Railway Museum was built to modernize and extend the former Umekoji Steam Locomotive Museum that opened in 1972. It offers a complete immersion in an immense 30,000 m² exhibition hall, distributed on three levels.

A comprehensive exhibition on Japanese trains

The visit starts from a giant station's platform, where 53 historical locomotives and carriages are displayed, from the old steam locomotives to the first long-distance trains, including post-war luxurious sleeping cars, and the first "0 series Shinkansen 🚅" whose operating started in 1964, the year of the first summer Olympics 🏅 in Tokyo. Many of these exhibits where recovered from the former Modern Transportation Museum in Osaka that closed in April 2014.

The platform leads to the main hall. At the ground floor are displayed numerous railway mechanisms, such as railroad switches, level crossing or train driver’s cabins, that any visitor can touch and try on at will. The aim is to learn while having fun to better understand the operating of the trains and the innovative history of the motors. In addition, there are about a dozen of beautiful old machines, such as the first "230 series" steam locomotive mass produced from 1903. The attraction here is an underneath path to have a look on the trains’ internal mechanisms like a true railway worker.

A fun and interactive train experience

The first floor’s gallery offers a view on the trains’ tops in the main exhibition hall, as well as two interesting attractions:

The museum also features in its outdoor space a railway roundhouse housing past century steam locomotives parked around a turntable. Nearby, a vintage train travels for a fee on a ten minutes’ tour that ends at the souvenir shop sheltered in the former Nijo station. By the way, Nijo station, built in 1904, was the oldest Japanese wooden station still in operation until 1996, before it was moved to its current location in 1997.

Kyoto Railway Museum also hosts temporary collections. For example, between February and March in 2018, the "500 series Shinkansen" (the newest model since 1996) was transformed in a "500 TYPE EVA series" by covering it with the colors of Evangelion saga: violet, black, green and grey (see our pictures below). The exhibition displayed various items in relation to the anime, including a human-size model of the "Evangelion Unit-00."

As comfortable as a Japanese train

At lunch time, the museum’s restaurant offers a choice of railway-themed menus. More than the food, what is remarkable is the panoramic view on the railways, To-ji temple and Kyoto Tower in the background. It is also possible to enjoy a packed lunched typical of train stations (eki-ben) in a Blue Train 20 series’ dining car 🚙.

Moreover, the museum’s entrance ticket is valid for the full day and allows re-entry at will. For lunch, the best quality / price / quietness ratio is certainly at the restaurant Kyoyasai, located in Umekoji Park. The menu provides fresh food from Kyoto to pick up among a choice and create one’s own meal. It is fitted with a terrace on stilts, very enjoyable when the weather is fine and with a view on the surrounding park.

Mainly aimed at railways amateurs and children, this renewal of the Railway Museum also successfully attracts a larger audience, thanks to the variety of trains displayed. In addition, each attraction benefits from explanations in English. The laid-back atmosphere of the place, welcoming for families and locals, gives a realistic overview of the Japanese’s relationship with their much-adored railways.

⬇️ Further down this page, discover our visit guide in Kyoto Railway Museum and around.
By Kanpai Updated on February 22, 2022 Musée ferroviaire de Kyoto
Review this place Have you ever visited Kyoto Railway Museum ? Share your opinion
Community's rating
4.67/5 (3 votes)

Our Pictures of Kyoto Railway Museum

How to go to Kyoto Railway Museum?

On foot -- About 20 minutes' walk from the station, towards west to Umekoji Park

Where is Kyoto Railway Museum?

When to visit Kyoto Railway Museum?

Any time of the year, but ideal on a bad weather day, for half a day

How to say Kyoto Railway Museum in Japanese?

Closed on Wednesday (except during school holidays)

Annual closing between December 30 and January 1

What to see near Kyoto Railway Museum?

The Tallest Pagoda in Japan
To-ji is a Buddhist temple of the Shingon School, located in Minami ward, at the southwest exit of Kyoto…
Kanpai's rating
~1000m away

The Temple with the World’s Largest Wooden Roof
Higashi Hongan-ji is a religious complex of the Pure Land (Jodo Shinshu) Buddhism, located on Karasuma-dori…
Kanpai's rating
~1.50km away 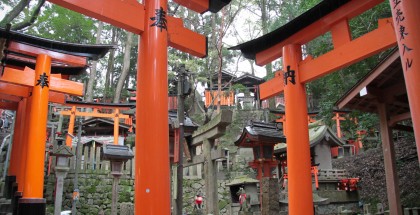 Fushimi and around
The South of Kyoto starts from Kyoto Station then includes mostly the districts of Fushimi and Minami. The…
Kanpai's rating
~2.63km away

A Collection of More Than 6,000 Sacred Treasures
Kyoto National Museum is a museum complex encompassing two exhibition halls and a garden, located in the…
Kanpai's rating