The Architectural Building and its Green Rooftop

Ginza Six is a skyscraper home to a luxurious shopping mall, inaugurated in 2017 in the heart of Tokyo’s Ginza district. With an artistic and modern design, the building offers a broad range of shopping possibilities including the most renowned Japanese and international fashion brands. The highlight of the place is the rooftop, laid out as a green oasis and welcoming a quiet break in the open-air.

Ginza Six was designed by architect Yoshio Taniguchi (who also created Tokyo’s Sea Life Park Aquarium and redesigned the Museum of Modern Art in New-York). The construction works lasted 3 years, and the building was elevated on the former location of the historical Matsuzakaya department store, that first opened in 1924. Ginza Six was inaugurated on April 17th, 2017, in the presence of political and economic figures such as:

The shopping space on the ground floor offers the first impression on the building with an overview of its five shared upper floors. The interior design was created by French designer Gwenael Nicolas.

The majestic central atrium is an artistic space where marvelous artworks are suspended for a few months’ exhibitions. When we visited in May 2019, "Six Boats" (see pictures) by Chiharu Shiota was on display, but other famous international artists had their artworks exhibited here, such as Yayoi Kusama and Daniel Buren. The art collective teamLab also provided an installation, a soothing virtual waterfall named Universe of Water Particles on the Living Wall, that can be admired all year around.

In the floors, a wonderful bookstore opens on a refined café.

It seems the number of staff members is higher than the customers’, but they are always obliging.

Restaurants and other services

As usual in Japanese malls, an entire floor is dedicated to food with about thirty high-end restaurants at the 13th floor.

More surprisingly, a 480 seats auditorium is home to a Noh theater playing dramas of the Kanze School, with the ulterior motive of making this art more accessible to the international audience.

Lastly, 7 floors of the building are occupied by offices, for a total superficies of 38.000 m², which is one of the largest office spaces in Tokyo. It is used by up to 3,000 workers, who are permanent employees or co-workers.

Ginza Six Garden: the woody terrace on the roof

The highlight is most probably the suspended garden at the top of the building. Spreading on 4,000 m², it is the largest terrace space in the district.

It offers 360 degrees views on the neighborhood up to the Tokyo Tower 🗼, and even on the SkyTree, even if it is less visible. Ginza Six does not stand very high (only 56 meters high / ~184ft.) and is indeed surrounded by buildings, but it has the advantage of providing a close vantage point on the roofs of Tokyo, the air-conditioning systems and small aerial shrines hidden like easter eggs.

The promenade is beautiful. With a large plaza decorated with a water mirror, vegetal walls and dense greenery, G6 Garden offers a careful arrangement that attracts families and the area’s employees who enjoy eating their bento 🍱 lunch on the quiet benches, sometimes under the shading of trees.

⬇️ Further down this page, discover our visit guide in Ginza Six and around.
By Kanpai Updated on October 11, 2021 Ginza Six
Review this place Have you ever visited Ginza Six ? Share your opinion
Community's rating
4/5 (1 vote)

Our Pictures of Ginza Six

How to go to Ginza Six?

Where to stay in Ginza Six?

Where is Ginza Six?

When to visit Ginza Six?

How to say Ginza Six in Japanese?

Admission to the building and to the rooftop: Free 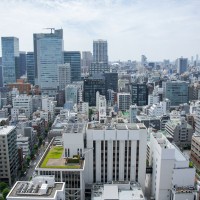 While Tokyo’s skyline is not its most famous trait, the tendency of Japanese people to destroy everything and…

What to see near Ginza Six?

The Unmatched View on Shinkansen Trains in Tokyo
Coline is a wooden patio at the 3rd floor of Kotsu Kaikan shopping mall, near Yurakucho station in the heart…
Kanpai's rating
~750m away

🐟 The Former World Largest Fish Market
🚧 Limited Access
Tsukiji is a district of Tokyo that is home to the world's largest fish market, founded in 1935. Visiting the…
Kanpai's rating
~800m away

The Western Style Garden in the Heart of Tokyo
Hibiya Park is a European style public garden located in the continuation of the moats of Tokyo Imperial…
Kanpai's rating
~1.05km away

The Japanese Garden Among the Buildings of Tokyo
Hama-Rikyu is a 25 hectares Japanese garden located in Tsukiji district opening on the Tokyo Bay in Chuo ward…
Kanpai's rating
~1.14km away

The Elegant Shopping Center in front of Tokyo Station
Kitte Marunouchi is a modern shopping mall facing Tokyo Station’s south exit, in Chiyoda ward in the heart of…
Kanpai's rating
~1.22km away

The surroundings of Tokyo Station
Marunouchi is a business district stretching between Tokyo Station and the Imperial Palace, in the central…
Kanpai's rating
~1.32km away

Ginza Six and the Kanpai Community