Hokoku-jinja is a small Shinto shrine located in the south of Osaka Castle’s park, within the limits of the moats. Dedicated to the famous warlord Toyotomi Hideyoshi, the place is filled with sightseers touring Osaka-jo’s keep and locals gathering for yearly events such as weddings or matsuri street festivals.

Hokoku-jinja is included in the grounds of Osaka Castle 🏯 and a few minutes’ walk from the city’s Museum of History, with large torii ⛩️ gates that signal each entrance of the spiritual site. Of a modest size and with a limited number of pavilions, Hokoku-jinja was built in 1879 on the order of Meiji Emperor to honor Toyotomi Hideyoshi (1537 - 1598) a famous warlord and one of the three unifiers of Japan. Two other dear members of Hideyoshi’s family are also enshrined here:

Hokoku-jinja is also called Toyokuni shrine, to mean it was built in memory of Toyotomi Hideyoshi, in the same way as Kyoto’s Toyokuni-jinja (豊国神社).

A bronze statue of Toyotomi Hideyoshi stands at Hokoku shrine’s main entrance. It is 5,2 meters high and was achieved in 2007 by contemporary sculptor Nakamura Shinya (born in 1926). It is the second representation of Hideyoshi at the shrine, as the first was used for the war effort in the 1940s. The lord’s statue is facing Osaka Castle, which was constructed by him in his time.

After the main pavilion in front of which the worshipers come to pray, the path continues to the right to a little green space. The mineral garden Shuseki-tei, that literally means "Toyotomi Hideyoshi’s stone garden" brings a touch of Zen to the shrine. Offered to Hokoku-jinja in 1972 and designed by Mirei Shigemori (1896 - 1975), this modern karesansui dry garden is seldom opened to the public, namely during the Golden Week in early May and during the New Year holidays. However, it is still possible to view it from outside through the gate or from above the walls for the taller visitors.

Shinto site’s visit ends with a handful of pavilions and steles that are quite standard and do not particularly stand out. Strollers especially enjoy the walk under the large trees providing freshness and shade in summer, then turning red in autumn 🍁.

A shrine to visit during its highlights

Hokuku-jinja is a shrine were locals come to pray for luck and success in their careers. Many Shinto weddings are also celebrated, and it is highly recommended to go on the weekend to have the most chances to attend to the young couples’ parade.

Early spring 🌸 is a good time for visiting the place when it is embellished by the Castle Park’s cherry blossoms. Otherwise, summer and its usual popular festivals are sure to provide an enchanting and friendly atmosphere. Events are staged at the shrine each month on the 18th. There are also two great summer and nightly events of Osaka City happening not far from the Hokoku-jinja:

First established on the neighboring Nakanoshima Island, the shrine was moved in 1961 to its current location. It benefits from its closeness with the Osaka-jo’s keep of and attracts its sightseers strolling in the Castle’s park. However, it is not a must-see and can be skipped. Its touristic interest heightens up during the matsuri, when the collective enthusiasm enlivens the place which is otherwise rather bland.

⬇️ Further down this page, discover our visit guide in Hokoku-jinja and around.
By Kanpai Updated on July 26, 2022 Hokoku-jinja
Review this place Have you ever visited Hokoku-jinja ? Share your opinion
Community's rating
5/5 (1 vote)

How to go to Hokoku-jinja?

By Subway -- Chuo or Tanimachi Line, Stop at Tanimachi 4-chome

How to say Hokoku-jinja in Japanese?

What to see near Hokoku-jinja?

One of Japan’s Most Famous Keeps
Osaka Castle is a fortified building surrounded by a park and enclosed by moats, located in the east of…
Kanpai's rating
~600m away 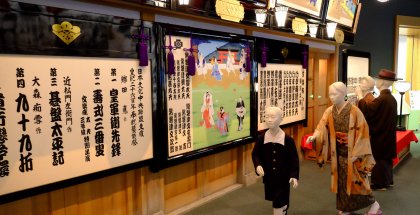 Naniwa, the Former Capital
Osaka Museum of History is located near the Castle park, east of the downtown area. It retells 1,400 years of…
Kanpai's rating
~1.56km away

The Long Sakura Shoreline in Osaka
Kema Sakuranomiya is a public park located on the shores of Okawa River in the north-east of Osaka in Japan…
Kanpai's rating
~1.83km away

The Venerable Relic in Umeda
Osaka Tenmangu is a Shinto shrine located to the north of Osaka in Kansai area in Japan. It was founded in…
Kanpai's rating
~2.79km away

Osaka’s Pontocho District
Hozenji Yokocho is a street located near the iconic Namba station and a picturesque area in the heart of…
Kanpai's rating
~2.88km away

The Trendy American Village in Osaka
America Mura is a trendy district near Namba in the south of Osaka, in the Kansai area of Japan. Fashion…
Kanpai's rating
~2.91km away

The entertaining heart of Minami-Osaka
Dotonbori is a popular street along an eponymous canal, located in the southern district of Namba in Osaka,…
Kanpai's rating
~3.12km away

Hokoku-jinja and the Kanpai Community