The Shrine Protecting the Capital

Hie-jinja is a great shrine located on a hill between Akasaka and Nagatacho business districts, in the center of Tokyo. Surrounded by tall office buildings, the Shinto site offers to the neighborhood’s salarymen and families a peaceful place of recollection, alongside a pleasant alley of vermilion torii gates. Every 2 years, Sanno Matsuri, one of the most important festivals of the capital, is held in its grounds.

The oldest traces of the shrines’ presence date back to the Kamakura period (1185 - 1333). Hie-jinja later became the shrine protecting the Edo Castle 🏯, at the time of its construction by Ota Dokan in 1478. In 1659, it was moved to its current location under the impulsion of Tokugawa Ietsuna (1641 - 1680). At the end of the Tokugawa Shogunate, the site continued to guard a place of power, watching over the Imperial Palace. It enshrines the guardian deity of Tokyo and is still an important shrine for the capital’s inhabitants.

As a Hie shrine, the main kami deity worshiped is the god of Mount Hiei in Shiga prefecture, named Oyamakui-no-kami or Sanno-no-kami, whose divine messenger is the monkey 🐒. This animal is therefore largely pictured here, especially in statues.

Hie-jinja is standing on a small hill, to which one can access by 3 different ways:

Hie-jinja’s pavilions were built in the gongen-zukuri architectural style, with the haiden and hondo pavilions sharing the same roof, but were destroyed during WWII bombings. The current days’ constructions, of a bright vermilion, are covered by a green copper roof, dating back to 1958.

Lost among the buildings and despite its important role in the capital’s history, the shrine is rarely busy. One can therefore enjoy its relaxing atmosphere under the trees surrounding the grounds for a spiritual halt in the heart of the bustling city. The large alleys and the impressive buildings accommodate groups of worshipers for the daily Shinto rituals, mainly family celebrations on the weekend, such as weddings or ceremonies for children (e.g. Shichi-go-san in November).

Hie-jinja’s extra is found at the back of its sacred grounds, with the secondary Inari shrine and its vermilion torii gates alley going down towards the street. There is almost no passersby so one can make the most of the shaded stairways scenery to take beautiful pictures like in Kyoto’s Fushimi Inari Taisha.

Hie-jinja is very popular among Tokyo inhabitants especially on the occasion of its grand festival called Sanno Matsuri (山王祭). It takes place every 2 years, on even years around June 15th, alternating with Kanda Myojin’s Kanda Matsuri.

The great procession gathers 500 participants carrying portable mikoshi shrines in the streets of Tokyo’s center, for one day. The itinerary goes through Tokyo Imperial Palace, Yasukuni Shrine and Nihonbashi Hie-jinja shrine. Hie-jinja’s head priest is the only cleric allowed to pray at the Kokyo Palace since the Edo period ((1613 - 1868).

Hie-jinja is a must-see visit all year round for tourists roaming in the chic neighborhoods of Akasaka and Nagatocho, home to several of the government's bodies, such as the Diet, the Prime Minister’s Office, and several embassies.

⬇️ Further down this page, discover our visit guide in Hie-jinja and around.
By Kanpai Updated on September 26, 2022 Hie-jinja
Review this place Have you ever visited Hie-jinja ? Share your opinion
Community's rating
4.33/5 (3 votes)

How to go to Hie-jinja?

All year round for one hour

How to say Hie-jinja in Japanese?

What to see near Hie-jinja? 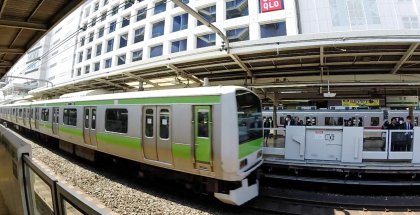 The Unavoidable Train Line in Tokyo
Yamanote is a train line in Tokyo operated by the Japan Railways East company. Its circular outline defines…
Kanpai's rating
~1.24km away 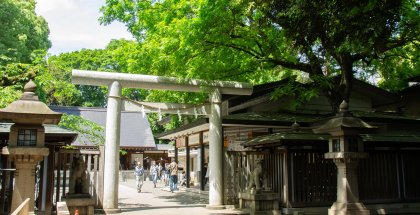 The Small Shrine Dedicated to Nogi Maresuke
Nogi-jinja is a small Shinto shrine located in Nogizaka in Akasaka district, near Roppongi in the center of…
Kanpai's rating
~1.25km away

The Elegant Architectural Complex in Akasaka
Tokyo Midtown is a shopping center in Akasaka district at the limit with Roppongi in Tokyo’s center. This…
Kanpai's rating
~1.34km away

The shrine on Tokyo’s highest hill
Atago Jinja is a small Shinto shrine standing on a hill, 26 meters above sea level, in Minato ward in…
Kanpai's rating
~1.44km away

Day and Night Entertainment in Tokyo
Roppongi is a district of Tokyo belonging to Minato area, in the center of Japan’s capital. Renowned among…
Kanpai's rating
~1.48km away

The Western Style Garden in the Heart of Tokyo
Hibiya Park is a European style public garden located in the continuation of the moats of Tokyo Imperial…
Kanpai's rating
~1.59km away

The Modern Aesthetics of Curved Lines
The National Art Center, Tokyo or NACT is a museum dedicated to temporary exhibitions located in Roppongi…
Kanpai's rating
~1.73km away

The Emperor’s Residence and Gardens
Tokyo Imperial Palace is in Chiyoda ward, right at the center of the Japanese capital. The compound is…
Kanpai's rating
~1.83km away

Hie-jinja and the Kanpai Community