As an unavoidable means of transportation on the archipelago, the train presents some characteristics that need to be understood.

Since travelers ask themselves lots of questions about how it works, we chose to synthesize some good information to know, to approach Japan's railway system quietly and with serenity, and to use it in the best possible conditions.

We can list Japanese trains 🚅 according to their velocity. Below are the most common, from the fastest to the slowest:

These distinctive types explain the important diversity in duration, over the same geographical distance.

Shinkansen trains aside, inside the cars above the doors, the diagram of the line shows the precise stations where the different types of trains stop, from the fastest (on the top) to the slowest (on the bottom). Since we pay for tickets depending on the covered distance, it is often faster and smarter to ride a fast train on the longest part of the journey and then change to a local train just before your arrival station.

Note that it's forbidden to eat or drink in trains, except in the Shinkansen and (usually) Limited Express trains.

Since 1964, the Shinkansen has been the star of Japanese trains.

It is a lot more expensive than the others, but also happens to be the fastest. Its public velocity can easily exceed 300km/h, while the latest magnetic tests have powered it up to 600km/h / 375mph!

It uses only its dedicated railways and its number of lines is carefully measured. Sometimes, full train stations are exclusive to Shinkansen, which you can recognize by the prefix "Shin"— just like Shin-Osaka which is 4 km north of Osaka station.

Here are the several regional Shinkansen, listed from north to south:

From Shin Aomori (north of Honshu) to Kagoshima (south of Kyushu) there are about 2,200 kilometers of Shinkansen lines, completed in March 2016 by a 200km additional line from Hakodate (south of Hokkaido).

Click here on our map to make it larger: 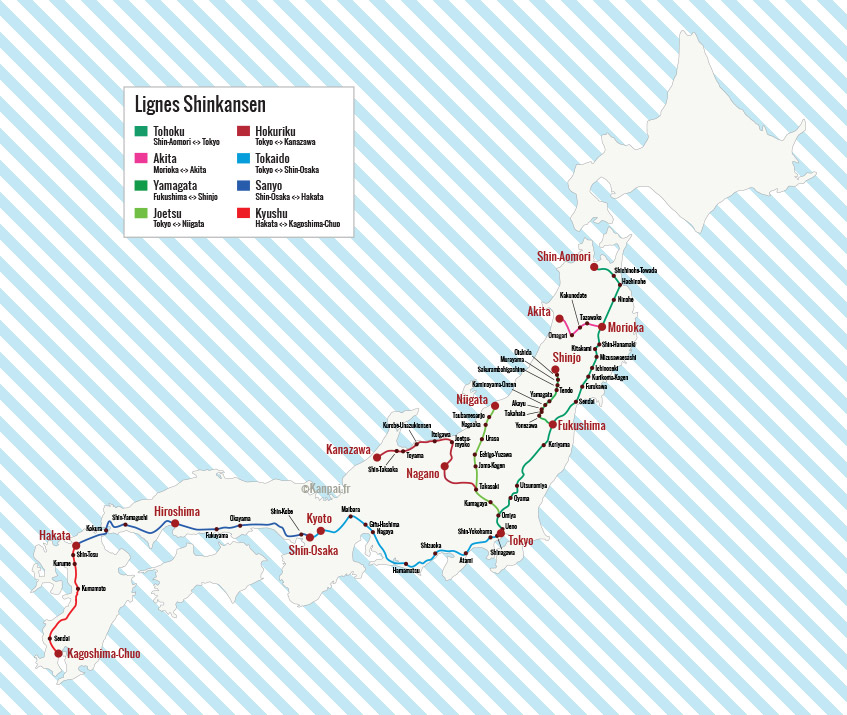 The Shinkansen is also divided into several types, with the fastest stopping in fewer stations. Here are the main types (names depending on the regions):

A good piece of information: the journey between Tokyo and Kyoto lasts 2h20 with a Nozomi, 2h40 with a Hikari and 3h30 with a Kodama train. T

he Nozomi was inaugurated in 1992.

To celebrate the 20-years anniversary of the Evangelion anime, JR operated a Kodama with the colors of the Eva-01, between Shin-Osaka and Hakata (from November 7, 2015 to March 2018, more here and there).

The Shinkansen technology has been recognized across the world since at the end of 2015, Japan has announced the development of high-speed train projects in India and in the US (between Dallas and Houston) in the coming years.

The next Shinkansen in Japan (the N700S series "Supreme") will be inaugurated in 2020 and its 16 cars will weight 11 tons less than the current trains. It will not be faster (300km/h) but will consume less and offer individual electrical plugs. The Green Car 🚙 passengers will benefit from having 15% more space for their legs.

How to purchase a train ticket in Japan

We cannot say it too often: for all information about schedules, hours, prices and stops, the Hyperdia website or application as well as Navitime's are your best friends. However, it's not possible to order a train ticket online.

Before purchasing a ticket, choose which company you want:

Note that it's not possible to book a seat (and there are no ticket inspectors) apart from the Shinkansen and the Limited Express. It is useless, therefore, to try booking a seat in slower trains.

You will find tickets vending machines in all train stations in Japan.

Above the machines you will see a poster showing the price of each journey, between the current station (shown in bold or red) and the one of your destination.

Pay the precise amount corresponding to your journey at a machine to obtain your ticket. You will have to punch it in at the automatic gates upon entering *and* at the exit, where it will be swallowed by the machine. It is therefore important to keep it during your entire ride.

As usual, the most convenient method will be to use a Suica card to:

If you own a JR Pass (only valid on JR lines), you should choose the most comfortable option since you do not have to bother carrying train tickets.

Simply cross the entrance doors (not the automatic doors) while showing your JR Pass to the JR staff.

In the Shinkansen and Limited Express, show your JR Pass to the train conductor:

Reserving or not reserving your seat in the Shinkansen

The Shinkansen has a very specific reservation system with a particular pricing:

The latter is not mandatory because each Shinkansen has up to 5 (often 3) non-reserved-seats cars at the head or tail of the train. They are designated like 自由席 non-reserved cars, so it's possible to get in without paying the price of a reservation.

However, here are some non-exclusive cases where it's advised, and sometimes mandatory, to reserve a seat (which is possible up to 6 months in advance):

Indeed since May 2020, when traveling by Shinkansen with oversize luggage, booking a seat in the Oversize Baggage Area is required (compulsory reservation but free for JR Pass holders). As a general rule, it is recommended to "travel light" regardless of the type of train you will ride.

Read more:
How to board Shinkansen with oversize baggage

If choosing a non-reserved seat, it's advisable to arrive in advance to be at the beginning of the line for entering the car: first arrived, first served!

Some reserved cars are "silent cars" in which it's forbidden to talk louder than whispering: please respect this rule if you travel inside one of them.

There is only one address: go to the green JR counters in train stations みどりの窓口 "Ticket Office" (sometimes JR全線きっぷうりば ).

If you do not speak Japanese, and because most of the staff does not understand English, write the desired information on a sheet of paper, especially the stations and hours of departure and arrival and places on the train (window side is 窓側 madogawa). It is possible to reserve all of your rides at once if you already have a planned itinerary. However, you will need your JR Pass in hand to book for free.

Tickets will be printed out in Japanese or in English. Usually, the JR staff does it in the international version for foreigners. The dedicated agent will systematically reserve seats next to each other, if possible. The number of the reserved seat is composed of the number of the car, one figure (the row) and one letter (the seat, from A to E in most trains).

Note that it is extremely hard to book tickets on the Internet 📶 for international travelers: Japanese people can do it through the unglamorous JR Cyberstation, from 6:30 am to 10:30 pm Japanese time. However, for those possessing a Japan Rail Pass, JR East (Tokyo region) only gives a possibility here in English, mostly for trains leaving from and arriving in Tokyo. Due to regional division, the Tokaido journey (toward Kyoto and Osaka among others) is unfortunately not among the given possibilities.

In the train, the ticket inspector will ask for your ticket only once, even if he or she comes back later during the ride.

There are several classes for traveling, but mostly only on Shinkansen:

Often times, the best discount (without counting numerous other practical aspects) comes from traveling with a JR Pass, which offers free train rides with JR during the entire chosen period.

Recently, JR Tours (JR's travel agency) has offered a small discount on individual tickets, for non-carriers of the JR Pass: Platt Kodama. As its name says, the promotion is valid only on this Shinkansen type, the slowest of the Tokaido. But it still allows to save from 20 to 30% off the public price.